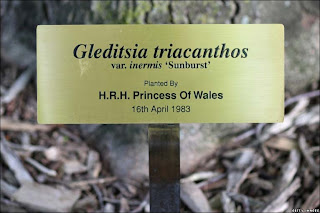 I don't want to dwell too much on Prince William's visit to NZ and OZ - he attended a few barbies, met some natives, including one group of which asked him to facilitate the return of one of their ancestral warrior chief's decapitated head, drank beers, swore, and lounged around in open neck shirts, trainers, and corduroy trousers.
He also planted a tree in Australia, very close to a pair which were planted by his mother and father on 16/4/1983. The species is Gleditsia triacanthos, the common name being Honey locust, note too the variety, Sunburst. I am perhaps fantasising, but John the Baptist was the forerunner to Christ and did he not live on a diet of locusts and honey in the wilderness.
Note too the following quotes from the BBC, Prince William trip sparks memories of Diana:
It must be intoxicating. People shouting, screaming and cheering as you pass. Women - young and old alike - mildly hyper-ventilating.
This has been the "Prince William experience" during his rapid progress across New Zealand and Australia in just five days.
The striking thing about the visit has been the one word which has been uttered by most people - Diana. They have seen, or wanted to see, the mother's influence at work when William cuddled a child or smiled in a particular way. 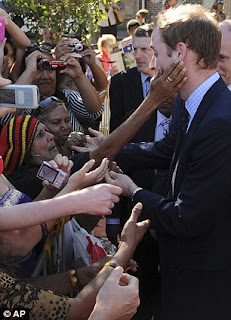 cheers
Posted by Newspaceman at 11:26

Notice that the Virginia Tech Shootings = 16/4

I guess the celebrity squares = 4x4.

Also on that day Hoffman discovered the effects of LSD - sunburst?

Cheers aferrismoon. Battle of Culloden too 238 years before. 238 is the sum of the first 13 primes. See your post Prime Time re Dans, Geller, (Jacobites etc)

Two years ago (25 years after tree ceremony/5 squared) the Pope - on his 81st birthday - met George Bush. Gordon Brown was in the States too:

"European nations want a better relationship with America and I feel I can bring Europe and America closer together for the future. And that's going to be to the advantage of all of us."

It was also the same day in '08 that the Bank of England agreed to allow lenders to swap mortgage "assets" (our liabilities) for Government bonds - in effect making the state the supreme lender.

It is an obvious fact - Wills is Diana's son and the Beautiful One he is. Did you notice in all of the photos where he is surrounded by the NZ'ers and Aussies how they were smiling! The 'man' is as charming as the devil himself.

Hiya NGA, I am not sure about the "devil" aspect, you are opening a big can of worms there which I can't get my head round. I know I titled a recent post Devil in Sports Casual (apt given the NZ tour) but that is the title of a old dance track which was seemingly lyrically sampled from a US street preacher. "Damien, The Omen, - 'cause you'r the Devil, you'r the demons - you say you make the music go backwards you hear Satan speaking" . Says it all really, the influence of movies on even the preaching classes.

Certainly I believe him to be a future false Messiah, sometimes I think that the Book of Revelations is a script rather than a prophecy - a script which has been acted out before.

Hi, it's a very great blog.
I could tell how much efforts you've taken on it.
Keep doing!

Hi, pertaining to youor post a few days ago regarding Prince Williams Raf wings award day and that there was an eclipse also. Well from the inception of the RAF to Williams Day of birth it was 2345 days. The RAF was born on April fools day 1918.

Mistake. In fact Raf till William birth it is 23456 days!

Cheers & thanks to the Olive guitars.

Kal, keep them coming, numbers are the key to it.

Also, The queen recently brought in THREE WISE MEN to prepare him for the throne. hmmmm

Thanks very much for that anon, appreciated.