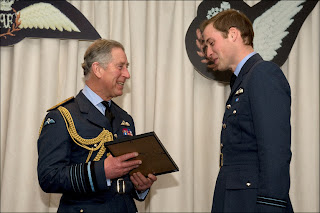 The above and below photographs are simply superb, what with the handshake, the crown over Prince William's head and, best of all, the Baphomet - maybe angel -wing. (also see photos to left)

It was taken today, 15/01/10, as he received another set of wings from his father, this time for graduating from his "advance helicopter training" at the Royal Air Force base in Shawbury.

Also today we saw the longest annular solar eclipse of the millennium, indeed the longest for 1033 years, until 23rd December 3043 - we have touched before on the relationship between the Prince and the Sun. 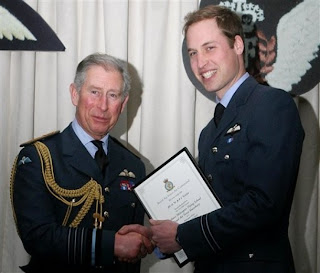 Posted by Newspaceman at 18:52

I'd very much be able to steal the connection of the elcipse and the fact that Wills got his wings from you for my 11:11 blog (with credit of course.)

No probs, help yourself.

Awesome. Already used it on a post on this forum: