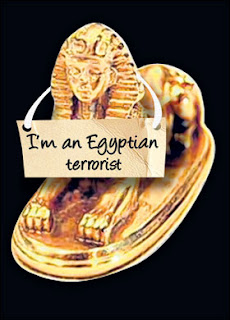 This just seems to follow on with previous, big cats, terrorists, aeroplanes, Egypt and Scotland.

On Monday just past, the Edinburgh Evening News publication reported that a "bomb note" had been found the 18.30 easyjet plane, EZY7944, from Edinburgh bound for Madrid after arriving from the Spanish capital earlier in the day. By the time a thorough search of the craft had been conducted, the crew had reached their maximum working hours and so passengers were given overnight accomodation, the flight leaving next morning.

It now emerges from today's Scotsman that the "bomb note" in question was found alongwith a statue of the Sphinx, and read : "I'm an Egyptian terrorist". We should maybe point out again the extinct volcano in Holyrood Park, in which are located the Royal Palace and the Scottish Parliament building is known as Arthur's Seat - after King Arthur - and resembles a Sphinx, or certainly a crouched lion. 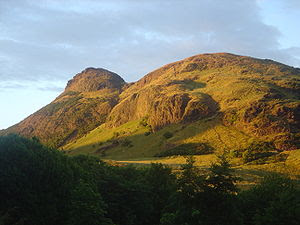 Top image from -The Sun - I Sphinx there's a bomb on this jet, article implicates the air-stewards (Stuarts)

Original "bomb note" story from Monday.
Posted by Newspaceman at 19:58