A picture tells a hundred words 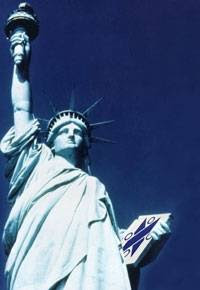 The above photograph comes from the front page of Rupert Murdoch's Edinburgh Evening News publication of Saturday 13th December. The story it relates to is trivial, 100 top performing Halifax Bank of Scotland bank managers being treated to a 4 day trip to New York in recognition for their efforts over the last year; the tone of the article - mock outrage - given that the Bank fell into State control on Friday 12th.

Bearing in mind my recent posts (for example this one) concerning the Scottish roots of our current faltering Western capitalist economy and the fact that in my opinion, last Friday, 12/12, marked other highly significant steps in the ritualistic (re)construction or rebirth of a ("New") World Order, for example the European LuciferianTreaty of Lisbon solar anniversary date, then it is surely more than coincidence that the Statue of Liberty carries a Bank of Scotland logo in place of the Declaration of Independence under the banner headline - What a flaming liberty (article here,)

For confirmation, we turn to other sources.

From Michael Tsarion's, Akhenaton, the Cult of Aton, and the Dark Side of the Sun:

The US Statue of Liberty is an Egyptian symbol that also connotes the Cult of Aton, the true owners and rulers in America. The star that the statue is erected upon symbolizes Sirius.

and this, courtesy of, and thanks to, Ben Fairhall :

Bartholdi, like many French Freemasons of his time, was deeply steeped in 'Egyptian' rituals, and it has often been said that he conceived the original statue as an effigy of the goddess Isis, and only later converted it to a 'Statue of Liberty' for New York harbour when it was rejected for the Suez Canal."

Sophia is often illustrated with a beard due to her having gone through the Alchemical 'Blackening' Sex Magic Ritual known as the 'Great Work' which transformed her into an immortal, all powerful Hermaphrodite

Note, the banknote portrays Walter Scott (The Wizard of the North). No sign of HM the Queen's guarantee anywhere as on English notes. The connection will be explained shortly? - think Burns and remember the K Foundation - KLF burning the £million on Jura.

Posted by Newspaceman at 17:07