It's the Scottish Kirk's General Assembly this week. The Queen has written to them, hoping that "people of faith" will "work together for the social good of Scotland whatever the outcome of the independence referendum". You see, some people in Scotland are taking the "independence" question rather seriously and, given one side must lose, there is likely to be some bitterness. Some people seem have forgotten, or perhaps don't even realise, that a global society beckons and "independence" will be fairly irrelevant in the grand scheme of matters.

Indeed, some of the Kirk's assembly surely remember then Prime Minister, Gordon Brown, speak  in 2008 at the same venue, when he told of his vision for a "global society governed by a shared moral sense" (BBC News):

And we find that from the timeless wisdom of all the great religions - from which billions across the world derive daily inspiration - there is a consistent ethical core that propels us to act: encapsulated in the golden rule that informs not just Christianity and Judaism but also Hinduism, Buddhism, Sikhism and Islam - showing that we are not moral strangers but there is a shared moral sense common to us all:

And from these common precepts of the world’s great religions, we can - perhaps for the first time - move from old battlegrounds where religions confronted often each other to a higher common ground where people of all religions can unite around what binds them together.

His sentiments were nothing new though, given the year before, whilst Chancellor and in India, he stated (Light Bringers):

Last year, the Scottish Kirk told how, in the event of independence, they would like Prince Charles to have a separate coronation in Scotland, and be crowned King of Scots. (Pennies from Heaven)

They followed that up a couple of weeks later with a report - which outraged Jews - stating :

Biblical promises about the land of Israel were never intended to be taken literally, or as applying to a defined geographical territory...

The 'promised land' in the Bible is not a place, so much as a metaphor of how things ought to be among the people of God. This 'promised land' can be found - or built - anywhere...


From this examination of the various views in the Bible about the relation of land to the people of God, itcan be concluded that Christians should not be supporting any claims by Jewish or any other people, to an exclusive or even privileged divine right to possess particular territory. It is a misuse of the Bible to use it as a topographic guide to settle contemporary conflicts over land.

The Inheritance of Abraham- A report on the promised land

The same Church report noted a post 1840  "widely held attitude that European colonialism meant that a land was ‘empty’ if western power and culture was not present."

The British did a lot of colonising and spreading of "Christianity" 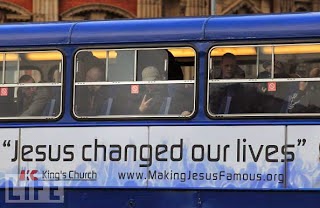 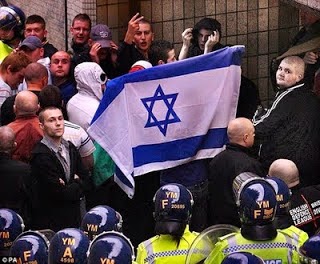 It is reported today that Prince Charles is in hot water after comparing some of the recent actions of Russian president Putin to that of the Nazis (BBC News) :

As they discussed Hitler's takeover of countries, the prince "said something to the effect of 'it's not unlike... what Putin is doing,'" she recalled.

The Prince made his remarks whilst in Canada's Nova Scotia - New Scotland.

There was a lot of fighting went on when Canada was "colonised".

Here @newspaceman, we are of the belief that the  "united religions", that Gordon Brown spoke of, may well be found in tolerant, all welcoming Scotland first, before exportation globally.

Rather like UK amalgamater,  King of Scots James, and his revised Bible.

cheers
Posted by Newspaceman at 12:20