Conchita Wurst, winner of Eurovision 2014, is not the first "bearded lady" to titilate the public.

Back in Victorian times they were often paraded as part of travelling circuses, in the freak show section.

Back in 1307, when many  Templar Knights were arrested and tortured by King Philip 1V of France, they allegedly confessed to occultly worshipping a diety by the name of Baphomet. Allegedly, the diety - as imaged below - was androgynous.

Some believe that other Knights Templar fled to Scotland and helped propagate freemasonry - the backbone of our current, modern, global society.

Infamous occultist, Aleister Crowley, believed that Scotland was an important focal point for, let's say, dark energies. So much so, he purchased Boleskin House to conduct Enochian experiments - talking to demons and suchlike.

that Baphomet was a divine androgyne and "the hieroglyph of arcane perfection":

The Devil does not exist. It is a false name invented by the Black Brothers to imply a Unity in their ignorant muddle of dispersions. A devil who had unity would be a God... 'The Devil' is, historically, the God of any people that one personally dislikes... This serpent, SATAN, is not the enemy of Man, but He who made Gods of our race, knowing Good and Evil; He bade 'Know Thyself!' and taught Initiation. He is 'The Devil' of the Book of Thoth, and His emblem is BAPHOMET, the Androgyne who is the hieroglyph of arcane perfection... He is therefore Life, and Love. But moreover his letter is ayin, the Eye, so that he is Light; and his Zodiacal image is Capricornus, that leaping goat whose attribute is Liberty

Crowley took the name Baphomet as his "motto" in the O.T.O.

Peaches Geldof was well into Crowley and had an O.T.O. tattoo.
Conchita Wurst sang, Rise like a Phoenix, for Eurovision.

We saw the phoenix at the closing of the London Olympics and at last years Glastonbury, where it flew over the main stage as the Rolling Stones broke into their track, Sympathy for the Devil. (Satan's Slaves) 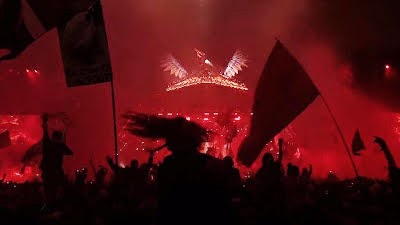 Some suggest that the mythical long lived phoenix, which reincarnates cyclically, also symbolises renewal and new beginnings. We will skip on the Scottish "independence" angle, and it's ritual importance to the "all welcoming" New World Order, for now.

Note, just referring to last post re Molly Smitten Downes, it appears she wore a "Queen of Egypt" mini dress for the event.

Posted by Newspaceman at 12:09

Did you notice Austria last won it in 1966? Could be a slight tip of the symbolic hat to make the subconscious understand where the phoenix lives.

I did notice the 1966, but never got the "England" symbolism. Many thanks Clarence.

On a footballl front, Beckham is up here today, will post tomo.

Well Molly was smitten down , it seems.

In English it sounds like he is the 'worst', as in the worst shall be first , or the first shall be last and other dualities