Aleister Crowley considered Boleskine to be the Thelemic Kiblah. This is an Arabic word which refers to the direction of Mecca, the holiest shrine of Islam. It has a slightly different meaning in Thelema, as it is mentioned in several rituals written by Crowley where it is identified with the East. The Gnostic Mass and Liber Reguli both identify the principal orientation (sometimes known as "Magical East") as being towards Boleskine. It is considered to be the focal point of the magical energies (also called the "93 Current") of the Aeon of Horus. In this way it is similar to Jerusalem in Judaism and Mecca in Islam.

Article in today's Daily Record stating that the Kirk (the Christian Church) wish to crown Prince Charles as King of Scots in a separate coronation should Scotland become independent :

The Church of Scotland proposals would see the heir to the throne become the first monarch to be crowned north of the Border since his namesake Charles II in 1651.

First Minister Alex Salmond has pledged Scotland will keep the Queen if there is a Yes vote next year.

And now three powerful Kirk committees have published a report saying monarchs after independence should be crowned in Scotland.

That could open the door to Charles having a separate coronation at Scone Palace, Perthshire, using the Scottish crown jewels.

To give my tuppence worth again, I dont think it will be Charles but rather William. Basically, the New World Order, or the global world, will be a supersized United Kingdom with single currency and single King. I do have fairly logical reasons for those thoughts, based on Bible reviser James 1st and 6th, freemasonry and it's current roots, magic, etc.


It's also worth noting that there has been some intense media speculation over what currency the Scots will use if we "break away" from England and again, my money is on that whatever form that takes, that will be the blueprint for the roll out to the rest of the globe. Wizard Chancellor, George Osborne, gives his thoughts here. 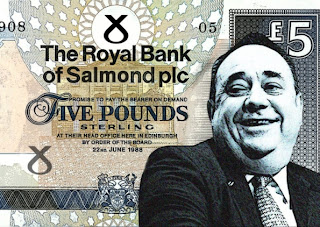 20 things you never knew about Scottish money  : "Edinburgh man John Law is known as “the father of paper money”, one of the world’s first self-made millionaires – he’s even said to have helped create the word. He also holds the dubious honour of being the first self-made millionaire to lose his entire fortune when his ill-judged dabbling in American investments sparked another first, the world’s first stock market crash."
Posted by Newspaceman at 10:13

Many thanks for your Lockerbie numbers.

There's a 2-part book written about Laws, in the first part and the 2nd part a play about the Amsterdam Stock Exchange.


This from the blurb on the back -

" The market never ceases to befuddle and beguile. These two venerable books are fixtures on the short lists for most valuable books on the securities marketd, and investors continue to cherish them."
- Martin S. Fridson , MD, Merril Lynch&Co; autor of Investment Illusions.

Mackay makes the point that Laws didn't want more paper money than specie but French King and aristocracy were so impressed by his idea and its results they just had to push it too far, seemingly Laws could do naught to stop their cupidity.