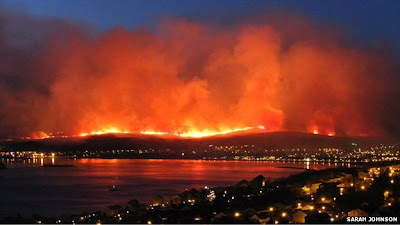 Monday just past saw a wildfire strike Fort William, just north of "Jimmy Savile's" Glencoe, in Scotland. The place takes it's name from protestant, William of Orange, the catholic hating Dutch prince so beloved of Glasgow Rangers football supporters. Local MP, Charles Kennedy, described the blaze as "unprecedented". The Glencoe massacre was a blood sacrifice to William of Orange and his House of Stuart wife Mary. (BBC News)

Yesterday morning saw chaos in neighbouring Inverness, a "horrendous" fire at the Eastgate Backpackers Hostel causing the closure of the High Street  from Inglis Street to Crown Road. Dozens were evacuated in their nightclothes, the Red Cross helping out. (BBC News)

Today, squarely 4/4,  sees Prince William and Kate visit a homeless shelter in Glasgow where they will communicate by Skype with two youngsters on work experience in the Netherlands. Additionally, they are to tour the Donald Dewar Leisure Centre. Their visit will be marked with a fly-past of 3 military Typhoon aircraft. (BBC News)

Posted by Newspaceman at 08:52

Looks awfully similar to the scene at 0:57 of this trailer:

pedophilia is not illegal in the Netherlands.. Not anymore.

Cheers Aangirfan, it gets spookier.