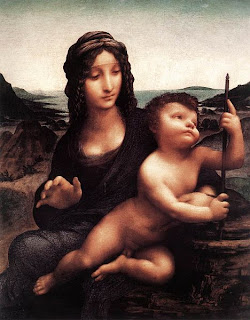 Some suggest that the works of Leonardo Da Vinci contain secret occult knowledge. Above is his Madonna of the Yarnwinder, which was stolen from the Duke of Buccleuch's Drumlanrig Castle in Dumfries and Galloway. It's return later became the subject of a large court case involving three lawyers, a private detective, and a Liverpool publican nicknamed the silver fox.

Some might say that the infant - Christ - in the painting, given his upward pointing index finger, is alluding to Hermeticism and indeed astrology, the dictum : "as above so below".

Back in March 2010, the US cartoon, Family Guy parodied the Lockerbie bombing. They showed an image of children lying in a crucified position in a circular formation. In the centre was a new-age type woman, potentially quasi Druidic, who recited "it's raining luggage and babies and limbs and Daddy doesn't come home".  (Scottish Sun) Family Guy was in the headlines just last week re the Boston marathon massacre. 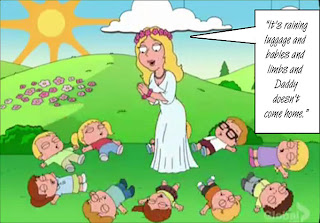 On 27th March 2010, the Scottish Defence League (a sort of "right wing"/anti immigrant group) planned to hold a demonstration at Lockerbie, in respect of the victims and to show their displeasure at Megrahi's early release. It never happened, although some members of the organisation did visit and lay a wreath. That was 6677 days after the bombing.


This week it has been widely reported that the remains of flight Pan Am 103 - Clipper Maid of the Seas - have been returned to the Lockerbie area, causing some upset. Apparently the Crown advised the victim's families of the impending transition last week, although they are keeping the exact date of transportation secret. If one were to hazard an "educated" guess at Monday past, 22/4/13, then that would be 8888 days since the atrocity, notwithstanding the potential 4's in the date make up.

One of the three lawyers - who were all acquitted of blackmailing the Duke -  was in court this week. Marshall Ronald is pursuing a claim for compensation in regard to "safely returning the painting to it's rightful owner". (BBC News)

When the silver fox - Robert Graham - recovered the artwork, from a character called Karl who he met in a pub car park, he telephoned Marshall Ronald to say "The Lady is on her way home". He then drove to Scotland but was forced to take refuge in the Lockerbie Manor hotel, allegedly due to poor weather. There, images were taken of him with the painting. (BBC News)

Lockerbie Manor hotel is no Travel Lodge. In fact it is Lockerbie House, a place of some history, indeed squarely where the Queensberry rules of boxing were drawn up. wiki - Lockerbie House (scroll down)

If we follow the suggestion of Da Vinci's hermetic infant Christ and look upwards at the time of the bombing - 7.03pm, a fairly significant picture is visible. I realise it may be undecipherable, however what is interesting is that it is the winter solstice, that five planets, including the Sun, Saturn, and Mercury are converging in the sign of Capricorn, whilst Mars, planet of War, sits at mid-heaven - directly above in the sky:

"Pan was a composite creature, the upper part–with the exception of his horns–being human, and the lower part in the form of a goat. (…)The pipes of Pan signify the natural harmony of the spheres, and the god himself is a symbol of Saturn because this planet is enthroned in Capricorn, whose emblem is a goat” -Manly P. Hall, Secret Teachings of All Ages

Some would suggest too, that the yarn from the Yarnwinder alludes to a deeper tapestry.

Note - Mercury is known as quicksilver (thinking silver fox), and in mythology can be linked to Hermes, as in Hermetic.

Foxes are portrayed as being crafty, or tricky.

Good that we don't forget Lockerbie.

It is good Aangirfan, but it has it's "negative" attributes too, I think. It's never too far from the MSM and there is maybe a nefarious purpose behind that ?

Perhaps the secret is that the child is not Jesus but is John the Baptist.
The yarnwinder looks like an upside-down version of St John the Baptist's cross. Also the virgin is holding her hand, like a crown with five points, over a blank space not over the child.
Only guessing! R

I left you a message over on Aang's website in the comment section but as you'll probably not see it (I know I seldom look back after I post comments on different blogs)...

the name of the boat is :

R (Whistler), thanks. I read too that the way the mountain range appears to decaptitate the child (artistically) is also perhaps indicative of that theory, given Da Vinci was too good an artist to have made such a slip.

KPR, thanks indeed for that. I found more info on it once I had the name. It appears that David Henneberry did not see any blood at first, until he climbed 3 steps up the ladder...