Margaret Thatcher's funeral is tomorrow. Last Friday, many media-outlets reported on how Millwall football club "hooligans", after departing their Saturday Wembley fixture,  were potentially ready to attack the anti-Margaret Thatcher "anarchists" in Trafalgar Square who had organised a street party.

Thatcher despised the football hooligan, the casual, the ultra. They were rife during her time as PM, one could suggest that the police learned the majority of their "crowd control" strategies at that time.

The media anticipated "ambush" never happened, although the "street party" took place, as did the football.

Whilst trouble did erupt at the Millwall game, causing nationwide headlines and front page stories. Blood and Stone Island were everywhere. Notorious Millwall have Scottish roots.

On April Fools Day 2009, innocent Ian Tomlison was killed by the police during the G20 London protests in Royal Exchange Passage. He was wearing a Millwall related top. The G20 security operation was codenamed Operation Glencoe. (wiki)

On Sunday, trouble erupted in Newcastle, after their fixture. Again it made front page headlines. 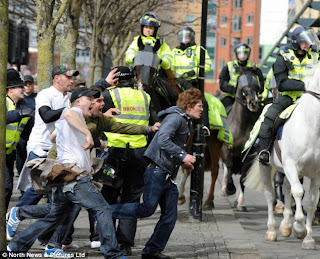 Yesterday a demonstration was held at Faslane. 47 peole were arrested. (here) On 4th April, Prince William visited Scotland, the next day a nuclear submarine. British Prime Minister, David Cameron, coincidentally was in Scotland on the 4th, visiting one of the Faslane Trident nuclear submarines (see masks). Trident has intimate connections with NATO. 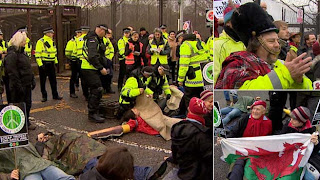 Jimmy Savile loved marathons. He loved Glencoe too, what with it's history and blood sacrifice massacre. He was great pals with Margaret Thatcher, often taking tea with her.

I await tomorrow's rioting and the choruses of Ding Dong, the Witch is Dead.

Note football hooligans are known as "casuals" and "ultras".Note the similarity between the hooligan ubiquitous-Stone Island clothing label and NATO logo.

Note that freemasonry in America has it's roots in Boston - note James Shelby Downard's KK33 on side bar, re the JFK assasination, specifically notes the Green Dragon and Bunch of Grapes "taverns" in Boston. The first "grand lodge of masons" was held in the latter on 30/7/33. (wiki). Also from KK/33, more references Wizard of Oz in regards to the town of Ruby which was "formed" on 11th April. See two posts ago for more on 11th April, Prince William, William of Orange and the Stone of Destiny.

According to the mail on line, the Boston bombs were pressure cookers. It sort of ties in with the police "kettling" technique, where they herd crowds into dead ends and leave them to boil, without food or toilet facilities. When they they then "burst", they are arrested as troublemakers.
Posted by Newspaceman at 11:20

More grist for the Mill.

I notice that all these events rely on the collective mentality, the hive-mind, be it hooligans, marathon runeers, anti or pro Thatcher.

A Hillsborough clock was presented at the weekend marking the time of the tragedy, amazingly on the same weekend of Thatcher's death.

Re: The very obvious foul on Torres in the City-Chelsea game , and many other 'official' decisions in the Prem this year - everybody can see it but the officials deny it and the game goes, and as such with the media versions of events such as 911.

It's almost Stalinist where one does not rely on one's own senses but of the 'state-media' , and if u don't YOU are crazy.

Aangirfan, judging by her "no u turns", her turning of UK society into a "greed is good" state, her decimation of the working class communities - and her no regrets, I would think so. The puppet & her mind were not for turning, hence the grandiose funeral. Having said that, my grandad eventually adored her, and he used to hold the lantern at the post office union meetings.

Moon, thanks. The state-media were partly to "blame" for my grandad's change of mind, I remember vividly the televised news and his opinions. Believe it our not, when he retired, he was given a TV in honour of his 40 year service. The BT and gas share profits probably helped too.

cheers to you both, & thanks

@ aang. Most probably, she said 'There's no such thing as society'
It seems a quote from a Communist Dictator.

@NewSpace... The Legs damaging is strange, on a running race, it could have a masonic Downard's meaning?

Masons and even Dante use the 'Counterpass'.

Hiya Anon, re the "counterpass", I follow the logic. I was thinking about blood drenched feet - ie red shoes.

Not a single report of any incident anywhere regarding trouble on the day of Thatcher's funeral. Astonishing.