No bones about it 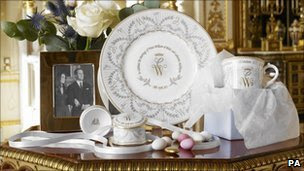 Tonight is the winter solstice, midwinter, the shortest and thus darkest day of the year, all coinciding, rarely, with a total lunar eclipse.

Meanwhile in snow-white London, the Olympic stadium will be illuminated for the first time this evening, a plethora of sport stars and politicians witnessing the electrifying of the 532 individual HID lamps which light up the arena. From Bible Wheel (Revelations) re the "hidden" properties of the number 532:

"I am Alpha and Omega, the beginning and the ending, saith the Lord, which is, and which was, and which is to come, the Almighty"

The Number 532 is deeply integrated with many expressions of Divinity

Meanwhile, coincidentally today, the official range of "Royal Wedding" bone china went on sale; bone china being famed for it' s whiteness and translucency, or shine, notwithstanding longevity. 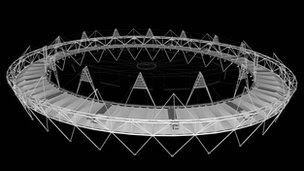 Note -Since I initially posted the ritual has taken place (here), the switch hit by ("elite bloodlined" -see previous post) David Cameron. It appears that there are in fact 14 triangular lighting towers, each capable of holding 44 lights, although each only have 38 at the moment, hence the 532. However, if, or surely when, they are fully luminated, there will be a total of 616 - a number that many would contest was the original pre King James' edition "Biblical" number of the beast , a fact pointed out to me by aferrismoon some time ago. Also, I have added a photo of the crown/halo/eye like stadium.

"I am Alpha and Omega, the beginning and the ending, saith the Lord, which is, and which was, and which is to come, the Almighty"

is; was; is to come
The hidden reincarnation principle; alpha-omega-alpha(again !). The cyclic nature of all material life here on Earth.

This is why the agrarian society was introduced to the 'savages' here on Earth - the reincarnation principle shown in each yearly cycle.

nice followup to "Gathering of the Clans?"

yeah clans gathering, and Isis carries over from prior post, she is khemic (dark/black) after all, so kudos -- great spacefuse re Rachel Johnson and her Oxford mag 'Isis' (some oxford quarters historically notorious for la negrita interests)

thus on year's darkest day, with Kore hidden deep in earth, and Demeter in full rage, a total lunar blackout, whilst Brother Boris ('the spidah') Johnson teams with Cameron to illumine the 2012 Great Stage for the Black Madonna Makeover

the u.s. mom-in-chief is Isisian, first lady of the planet, in combo w/wales queen -- shades of the Royal/Alkhemical Wedding ... dark motif reminds me of yr william as 'dark prince' work

the 14 triangles also interested me -- the triangles recently arising re "containment of demons/power" (eg the iconic Love Field swearing-in photo).... a local practitioner, the Zodiac, also uses 14 in crypto-sacrificial ways

the BBC News link leads to a 30 Sept article, "A Different Kind of Olympic Stadium," here

"We have worked with artist Sophie Smallhorn to integrate the colours of the London 2012 brand into the design of the circulation routes, which help to establish the stadium as an international symbol for London and for the 2012 Olympic Games."

Sophie = sophia, the feminine "wisdom" of the gnostics, chaldeans, etc

Smallhorn - the Little Horn of the antichrist/beast appears in both daniel 7 ('fourth beast') and revelation 12-13 in which 'the dragon' gives him 'power, and his throne, and great authority'

christ via john in rev 13 witnesses the beast's literal rising out of the sea, with 'ten horns' (same number as Daniel's vision of the beast while adream in literal Babylon)

these prophecies concur with zechariah's prediction of a re-established image of Babylon the Great (Shinar, expanded globally) being pedestalized ('set up on her own base') in the endtimes -- a planetary beast-system that combines the religious and political characters of ancient Babylon

yes i rambled but you definitely rang the gong, bit o'shine on dark shinar

Anon, thanks, had to look up Agrarian. Will be posting on a very related subject re Prince Charles, later in the week I hope.

Ray, thanks for the info. I heard a brief clip of Cameron, he doubletalked in terms of sport and it's relationship to everyone doing their best and working together in a team. I know that some don't trust the KJV, I read it was "revised" by the Jesuit fraternity based at Holyrood (the place/palace i keep bleatin on about). He was House of Stuart. Re Sophia, it was reported today that that was the most popular girl's name in Scotland last year. It was jack for boys. See my House that Dan built post.

From WIKI, http://en.wikipedia.org/wiki/Agrarianism
we see the philosophy of the agrarian society.....becoming more independent and self-sufficient.

Not only the on-going reincarnation principle for the material world but it was also shown for the connection to (individual) spirituality. Thus, in effect, showing each of us the 'bonds' to which we are tithed here on Earth (/in the Matrix)......but, ultimately, the possibility of breaking free.