Trampling all over the world ?

News fresh in today concerning last week and a military operation in Afghanistan again ties in well with my general thoughts behind last week's postings, as we read from the BBC of a major assault against Taliban forces spearheaded by Inverness based Scottish Regiment, The Black Watch, who's logo is pictured above. What you won't find noted on the latter's wikipedia entry is that their beastly nickname is the sheep-shaggers; which also herds in well with the cows and pigs gist of last week's events. ( BBC report here)

It appears that the operation actually began "just after midnight, which would make it Saturday, the day of the Solstice (and Prince Willams birthing ceremony), by my reckoning.

Also from today, we find that ancient architectural folly, Prince Charles', financial figures have been released into the public domain, his personal income (mostly from farming enterprises) squarely rising to a bovine busting £16.4 million, whilst the taxpayers contribution to his working endeavors rose to £3.03 million. At the same time he somehow managed to pay less income tax. (BBC report)

In that vein, another event detailed today was the selling of some Princess Diana memorabilia at auction, the BBC leading the story with her school eraser as pictured.
BBC report here 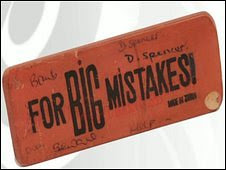 Last and maybe least, again from today, a BBC "magazine" article titled "Why do cows attack", written in the aftermath of a tragic bovine event at the weekend; a vet named Liz Crowsley trampled to death on the Pennine Way it appears. Which, I suppose, takes us back into Scotland (the Way ends just inside the Scottish border) or bearing in mind occultism and Aleister (Crowley), further north to Inverness, the base of those aforementioned wellington boot wearing squaddies and the location of a large music festival, Loch Ness situated Rock Ness, two weekends ago, the Sun-day when lightening killed 16 cows.

cheers
Posted by Newspaceman at 17:16