We begin today's esoteric journey into the dark future ahead for humanity with what seems a minor news story from yesterday: Royal gamekeeper, Robbie Elliot, being fined £450 for killing a badger with an unchecked snare on Prince Charles' Birkhall estate on Royal Deeside. Thus, to begin simply, the name badger possibly comes from the French, bechuer, to dig, appropriate enough, for the light avoiding, nocturnal, bear-like animal loves digging. So, in the spirit, lets do a bit excavation work ourselves.

Badgers have historically been persecuted (indeed we used to eat a lot of them, especially the white colonists of America historically, whilst even today the French eat it where it is prepared in the manner of ham) however, nowadays, the species in the UK is in imminent danger of a state-sponsored cull, it's supposed crime: to be a carrier and spreader of bovine TB. You will remember the (4 squared) 16 electrocuted-in-a-thunderstorm blood brother bullocks on Sunday, 14th, as noted in my last post.

Monday, again as noted in my last post, saw the State advise that the enquiry into the Iraq War would be held secretly, almost in the manner of the American founding Scots freemasons; whilst sleeping on that hoodwinking brought us into Tuesday, 16/6, when, early on in the morning, a Ford Mondeo police driving school vehicle with four officers inside crashed on the A820 Doune - Dunblane road. Now the Ford motor company was founded exactly to the day 106 years before, by Henry Ford in 1903 in Dearborn, Michigan, America and Mondeo means world; yet, forgetting numerical consistencies, perhaps as significant is the Dunblane connection.

Most will be aware of the now sadly globally oft-repeated pupil massacre which took place at Dunblane Primary on 13/3/96 by Thomas Hamilton, and the resulting "conspiracy theory". The latter itself is both complex and multi-level - regarding child abuse, freemasons, sex rings and zionist New World Order plans to name but some strands. Lord Cullen chaired the enquiry into the affair, as he did with the Lockerbie bombing appeal. Cullen became part of the Order of the Thistle just last year, the "honour" bestowed upon him by HM The Queen, Head of State, in Edinburgh.
Flashing back to Sunday, bullocks day, where we saw Andy Murray, the Scots tennis player, winning Queens. Andy was at Dunblane primary the day of the massacre

Back to badgers though, because, unusually, a second report regarding the black and white creatures has popped up on today's, Thursday's, BBC News. This time though it was a loveable little baby one which was rescued by the Scottish Society for the Prevention of Cruelty to Animals after falling down a storm (go back to the bullocks) drain in Ceres Road, Cupar.

Ceres was a Roman goddess, actively and in-depthly investigated (recently resurrected) by half Scottish sounding American researcher, Todd Campbell, in his latest related post Ceres Strikes? (like lightening?) where he ties in the Mexican pig flu outbreak. Returning again to beef curtains Sunday then, and the death of the first European from the virus, Jacqueline Fleming, from Glasgow. Her premature baby died the next day:

Jacquline = It is of French origin. Feminine form of Jacques, the French version of James and Jacob (Hebrew) "he who supplants"


Today too, in the week that Prince Charles was media-depicted as overbearing and old fashioned, seemingly badgering the Royal Family of Qatar into changing their design plans for the old Chelsea Barracks site in London, we saw Princes William and Harry, brothers in some sort of love, speaking of their desire for a military career. 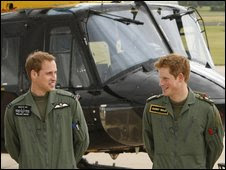