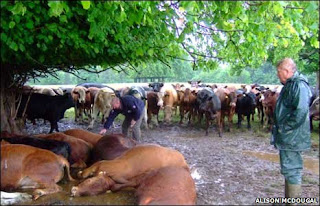 Today, Scots born British Prime Minister, Gordon Brown, announced, at 3.30, that there would be no public enquiry into the Iraq war fiasco, rather the "investigation" would be carried out privately. No bones about it.

Also today we heard that the Calman Commission, chaired by Kenneth Calman, has advised that, in their opinion, radical changes should take place within the Scottish Parliament, in terms of it's powers and revenue raising policies. (KC and the sungod gang)

If you think these are unconnected, some food for thought:

As most should know, America and Britain began the Iraq War on the basis that bogey man Saddam had stashed a pile of mass destruction weaponry in order to have a dash with the West. No weapons were ever found.

The history of today's date in terms of Britain and America seems relevant; from wiki :

1777 – The Stars and Stripes is adopted by Congress as the Flag of the United States.

Iraq and 9/11 catalysed "our world" and today we see the "gold" of the New World forming. But to perform alchemy, everything must go back to base.

Last post I touched on the Rio Paris flight, perhaps hit by lightening. On April 1st we saw a helicopter ditch in the North Sea, 16 dead, the day before the London G20 summit.

Yesterday, Sunday, the day before the Iraq enquiry decision unveiling, and the sure to bankrupt Scotland aforementioned CC report implementations, saw a most unusual happening here, in Scotland. In East Lothian, an area steeped in Scottish history, a bolt of lightening apparently struck a farm animal, an 18 month old bullock, killing him and15 of his half- brothers in the process. As the farmer notes, from the BBC:

The beef farmer said: "It is a shocking thing to see. I felt numbness, it was unbelievable.

"They were all either sitting or lying where they had fallen in a regimented row. I have never seen anything like it in my life.

It requires noting that the Queen is to visit the agriculturally based Royal Highland Show, for the first time since 1984, this week, in the year of homecoming. (see king conn.)

Also, the sun moved out of the sign of Taurus - the Bull (sidereal astrology) around 15th June.

Posted by Newspaceman at 19:01

"KC and the sungod gang"

I seem to have posted about the electrocuted cows before noticing your post, great connections btw...

Ray, on the subject of lyrics, this verse from the Beastie Boys Rhymin' and Stealin' seems apt:

Ties in great with the 14th June too, given Mutiny on the Bounty.

Just bumped into the Cow story , will link it with the 19 cows that died in Caddo Co. USA a month or so ago.

Just bumped into the Cow story , will link it with the 19 cows that died in Caddo Co. USA a month or so ago.


yeah AF the Lead Mines of Caddo popped up again in a post i'm working on -- seems polliwogs fell out of the sky over japan recently...

in these days of New Egypt, cows of course suggest Hathor

Susie-Anna (Susie-queen) reminds me of Fairhall's recent post on Virgin-Goddess Susan Boyle (boil being a surfaced plague, ie on the skin)