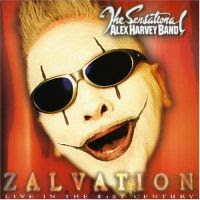 Again as with my previous post going back to just before Christmas and the discovery of the severed mummified head in an Ikea bag, I highlighted a trilogy of almost simultaneous fires in the Edinburgh area on the night of the 20th, the most spectacular being that in the Indian restaurant Khushi's, part of an old church in Edinburgh and just a few yards from the historic Knights Templar lands. ( see Babylon Burns - Baphomet Rises) 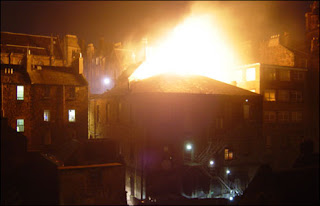 What I was totally unaware of at the time was that the basement part of the building, The Liquid Rooms, was hosting glam-rock act The Sensational Alex Harvey Band, who were set to hit the stage just as the inferno ignited.

Today they were finally allowed to visit the venue in order to ascertain damage to their equipment and instruments which, unfortunately, are ruined through smoke and water damage. (BBC report here)

What strikes me though, perhaps in the light of Heath Ledger's posthumous Golden Globe award for playing the Joker in Batman movie The Dark Knight, is their last double album, live and titled Zalvation, released in 2006, and pictured above.

The first side includes the tracks Midnight Moses (him of burning bush fame) and Isobel Gowdie, an infamous Scottish lady who confessed to witchcraft back in 1662. (wikipedia Isobel Gowdie).

The first track on the second CD is called - Give My Compliments To The Chef.

It should be noted that in Scotland the longest, or darkest, night of the year is normally the 21st of December, although this varies by a day in a leap year.

Curious stuff...I guess I'm not amazed that the Ledger death continues to ripple through the world...people don't even notice, do they?

Being honest Todd, I don't really see that much significance, but it is worth noting.

I find it curious that a New World Order is being established in front of our eyes and yet not many people seem to notice, whilst the majority of those who do, seem to be more interested in making money out of their "knowledge".

That to me is the most frightening part of it all.

It's called the 'Know-Ledger'.
Doubtless the NWO abhors a vacuum

Ledger being the operative word as a huge debit appears for future humanity to "repay".

Funnily enough aferrismoon, I just checked the etymology of heath which comes from wasteground, in particular heather (as in the plant).

Ledger sources back to a church, just like the liquid rooms and Indian.

The head that was found in the bag was a lady called Heather. I will write more about it once the facts come to light, I dont feel particularly good writing about it at the present moment.

The Heather has another name - ERICA.
Apparently SET shut Osiris up in a coffin and pushed him out to sea. After floating a while he 'met' a tree which grew around the coffin - this 'tree' was the Erica Bush or Heather , though I find it odd to have this plant growing off the coast of Egypt.
Nevertheless its important in the story. Isis finally finds Osiris, gets him out of the tree. The Tree becomes the symbolic Djed Pillar.
She gets Osiris home and Set gets crazy and rips Osiris into 14 pieces, of which Isis finds 13. She can't find the phallus as afish ate it, so she form an artificial phallus for Osiris and he rises again.
Heath and ledger = quite symbolic words
His initials = HAL , I think

Considering the Financial Crisis the name Ledger = pretty synchronous, while for me Heath=Erica which nearly = AmERICA
an anagram of AA-CRIME.