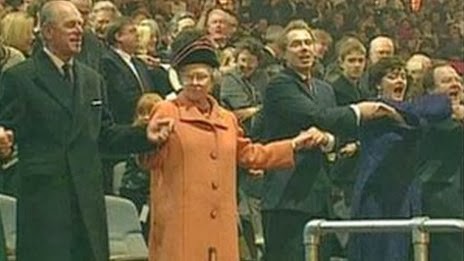 At the turn of the year the BBC published an article - How Auld Lang Syne took over the world.

Within it, we discovered how a "folk  song with words that most people do not know, or fully understand, became one of the world's most popular songs".

Apparently, it is all to do with "Rock star Scottish bard Robert Burns", who wrote the lyrics in 1788, the tune appearing after his death. The article is a wealth of information re the song, for example: Hollywood loves it, it's place in the American Civil War, the first World War,  it's popularity in China, it's popularity in Russia, and that the Dutch utilise it for their football song, We love Orange.

The article neglects to point out that Burns was a freemason, which may well explain his, and his poetry and songs, global popularity. Indeed, Robert has more statues dedicated to him than any other non-religious figure with the exception of Queen Victoria and Christopher Columbus. (Scotland.org) Note that Burns was initiated into the lodge on 4th July. From Robert Burns as a Freeemason:

Freemasonry's influence on Burns's poetry is quite visible. Besides the aforementioned works which specifically deal with the craft, a number of poems have a strong dose of Masonic philosophy and ideals in them....

For Burns, Masonry was everything that the Kirk was not.

(Note that the Kirk is the Church, I touched on both it, and 4th July, at the end of last month - Stage Managed  & Ball Games - in relation to Scotland's occcult importance to the New World Order)

Our attention was  rekindled by the image of John Kerry in Kiev this week. 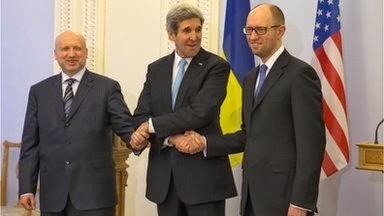 Loving your blog.
Here in Japan, we are also very familiar with that tune. It's systematically woven into our education system. http://www.youtube.com/watch?v=vPy-dq84q28
And also, when you go to the shops,you get to hear the tune at about 10 minutes before they close for the day. It means you have to voluntarily leave the place before being told by the shopkeepers. http://www.youtube.com/watch?v=Mz11L-DijKM
Anyway, I've been stalking you for a while now. Thanks a lot for your articles !

Many thanks hirundine, note though that she does not "cross them" in the traditional manner.

Japanon, many thanks too, very nice of you to take the time to comment. The first video reminds me of my schooldays...frightening.