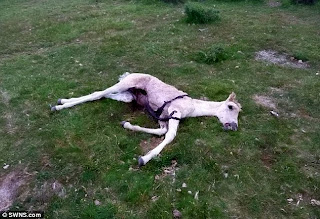 The morning after the alleged full moon birth of Royal baby George, a horrific discovery was made in Devon National Park. A mutilated, two month old pony, with it's genitals, right ear and tongue sliced off, not-forgetting eyes gouged out, lay within a burnt-out ring of fire. Little wonder Johnny Cash was so desperate to leave similar. Blame has been apportioned to Satanists. According to the mail on line, the incident happened on St. Winebald's - a Germanic Saint -  Day, although a brief google search finds no precise confirmation of this. However, the same article notes that two horses were found in neighbouring fields at the Summer Solstice - apparently, according to the article, another key date in the Satanic calender, and indeed baby George's dadda's sun drenched (and eclipsed) birthday.

Moving on swiftly, yesterday's BBC reports of how a ultramarine blue cockerel, symbolising regeneration and strength, has been erected on the fourth plinth in London's militaristic Trafalgar Square. It is not so much the bird that interests me, rather London Mayor, Alexander Boris de Pfeffel  Johnson's  comment :

The public sculpture, said Mr Johnson, "doesn't just show that we're the sporting capital, but we are also the artistic and cultural capital of the world".


cheers
Posted by Newspaceman at 11:25

So apparently it's nearly day-break. I wonder what Bozo thinks the blue mustang at Denver represents.

Had not encountered blue-horse. Is a bit scary. Blue seems to be popular - blue taxi for "post-birth" middletons (google it you desire), Kate's dress. etc. etc.

It's giving me the blues