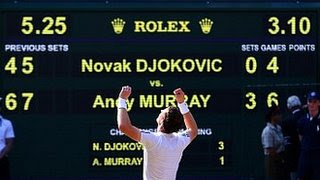 Today, 7/7, Scotland's Andy Murray, after dying last year in the same event, won lawn tennis' Wimbledon. The crowd were in an ecstatic frenzy.

He was the first British player to do so for 77 years - since Fred Perry.
Andy was at Dunblane primary school when Thomas Hamilton struck. He mentioned it very recently, it's brought up today in the mail on line.

Some people believe that some of the alleged terrorist incidents that occur, and we can include Dunblane in that, are black magick rituals; blood sacrifices. London's 7/7 may fit the bill too.

Back last year, I noticed a string of coincidences pertaining to wine, Andy Murray, a ram's headed Lady Gaga, Lady Diana, Kate 'n Wills,  Alex Ferguson and Sean Connery. I suggested it might be some type of occult Dionysus worship. Some say there are strong parallels in the mythology between Dionysus and Christ. (Wine, woman, and song)

"Dying God" Dionysus was a god, of  "of the grape harvest, winemaking and wine, of ritual madness and ecstasy in Greek mythology."

Here in Scotland, recreational drug users have been warned to stay clear of a green "ecstasy" tablet, stamped with a Rolex crown. There  have been at least six deaths so far, maybe more. (BBC News)


Football casuals' urban myths state that back in the late-eighties, when football hooliganism undertook a mammoth revival, the authorities/powers that be - Margaret Thatcher was always a prominent name - turned a blind eye to ecstasy use, indeed maybe even propagated it - as the drug mellowed out the previously violent youth, who were considered a risk to society itself.

Note - Wombles were the pioneer recyclers.
Posted by Newspaceman at 19:14

"turned a blind eye to ecstasy use, indeed maybe even propagated it"

i could believe it. ecstasy being illegal is something i've been trying to wrap my head around for years. i don't buy for one second that police are naive on where people use it, and how much it goes on.

before, when i wasn't tuned into wondering about the new world order etc, i suspected there was an unspoken agreement between the police and club/event organizers where ecstasy use is typically rife. the agreement being, people are going to get their hands on it and use it one way or another, so it's better to let it happen where they /know/ it's going on and in a safe venue.

but since i got a little more spiritually aware, i'd agree with what you suggest. if it wasn't for the ecstasy and dance culture that goes with it, TPTB would have to work that bit harder to keep millions complacent.

as long as folk have the weekend to look forward to, things are "alright"

bit like what you were touching on with Glastonbury last week?

I've had ROlex on my mind of late, they sponsor the Grand Prix which is rich in Illuminated symbolism and cyphers.

Fred Perry logo - Laurel wreath, consisting of 2 branches off; Twin Kings ?
Each branch has 15 leaves.....15 steps led from the Jewish women's court to the Brazen Gate and the inner court where the temple and altar stood.

Lady Gaga - ram's head.....the ram was the totem animal of the jewish tribe of Gad (one of the Twins). Dan(ny bhoy ?) being t'other Twin.

Andy Murray said: "We knew the guy (Hamilton). He had been in my mum's car. It's obviously weird to think you had a murderer in your car, sitting next to your mum."

Is the Fred Perry logo in fact a depiction of the Oak King, a combination of leaves in the shape of horns? Although ostensibly it’s suppose to be a laurel wreath ... which in itself was based on the original symbol for Wimbledon!
http://paganwiccan.about.com/od/yulethelongestnight/p/Holly_KIng_Yule.htm

Getting near commenter No. 5 - oak king.

However, the FP logo with it's two branches represent The Twin Kings - The Oak King and The Holly King.
http://en.wikipedia.org/wiki/Holly_King_(archetype)

The FP logo shows the dominance of the male(s) with scant regard for the third person (trinity ?), the female (apart from the 15 leaves on each branch). Thus an acknowledgement but with an absence of the true story. Absence of the female leaves it open for never-ending strife between the duelling Kings.

Thanks to all, will respond tomo.

Hiya Clarence (& others), sorry for delay in responding. Aye, it's all part of the same framwork, bread and circus, just like Glastonbury and T in the Park.

Anon 2, thanks very much for your contributions, appreciated as always.

Many thanks to all.