Politics is something rarely touched here, I see the left and right wings in an ornithological manner, as part of the same bird - a phoenix. Yesterday though, a rare visitor to Scotland caught my potentially vivid imagination.

Traditionally in Britain there were two or three main political parties, Labour, Conservatives and Liberals. Recently though, a new party has emerged - UKIP (United Kingdom Independence Party), led by a Nigel Farage. UKIP want an end to immigration and want Britain out of Europe.

Yesterday, Nigel visited Edinburgh to promote his Aberdeenshire (North East corner of Scotland) by-election candidate, Otto Inglis. He chose a public house called the Canons' Gait for his press conference, however things did not go according to plan - or maybe they did. A group of "protesters" from  Radical Independence Edinburgh, who allegedly promote Scottish Independence, arrived and jeered him with cries of Nazi, racist scumbag, bawbag, and a mixture of these terms. A bawbag is a scrotum, baw being colloquial for ball. (mail on line) (Scottish Sun) Nigel needed a police escort.

The Canons' Gait is a pub with a claim to fame. It nestles at 232 Canongate, which itself is part of the Royal Mile, a street linking Edinburgh Castle with Royal Holyrood Palace. Back in the 1500's, Mary Queen of Scots' tailor, Jacques de Soulis, lived at the same address. The bar advertises this fact prominently. 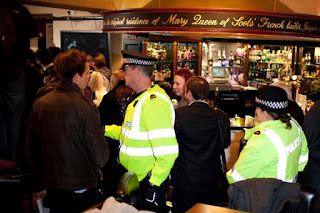 House of Stuart, Mary Queen of Scots (MQOS), was the mother of James 6th and 1st, the Bible reviser and promoter, UK amalgamater, and propagator of the "divine right of Kings". Mary was executed, creating heaps of public sympathy thus James - a protestant Stuart - was fairly popular with the masses. One can perhaps see modern parallels.

Let's turn to Lady Gaga. Almost exactly two years ago, on May 15th 2011, Gaga played a concert at Carlisle. It was part of BBC Radio 1's Big Weekend. It spoke volumes to me, because her appearance came exactly 444 years to the day after MQOS married James Hepburn in a protestant ceremony (unusual for catholic Stuarts). MQOS was beheaded after imprisonment at Carlisle. Gaga, attired in prosthetic pregnancy bump, dedicated a track, Orange Colored Sky, to Prince William and Kate. The colour orange is linked to the Protestant "faith".  Her performance ended with a song called Judas.

Which takes us back to the phoenix 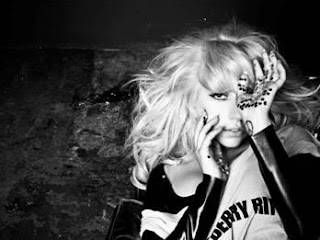 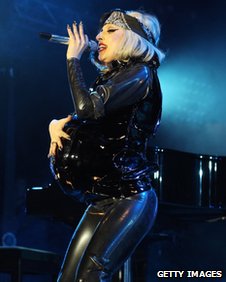 Posted by Newspaceman at 10:18

Officially, Mary Queen of Scots was the mother of James 6th and 1st. But some say that James was a bastard.

The Canon's Gait pub is where some meetings of the Scottish Republican Socialist Movement [SRSM] have been held.
Sound move.....!

Sorry, but your Judas & phoenix comment at the end ???

U KIP might ally itself to your phoenix musings as the phoenix 'kips' for a number of years.

Ferguson to Moyes. It seemed from the media almost impossible for ManU to choose anyone bou a Scot for manager.

Fergie and the Master Race

Aangirfan, thanks, maybe in a "Rosemary's Baby" way ?

Anon 2 - No need to be sorry, never explained myself too well. King James had a dramatic effect on "society" both UK wide and global, given "his" Bible. I see Prince William in the same light, hence pheonix. Gaga was maybe alluding to her being a "Judas" in this instance, saying what she was told to say (for money).

The UKIP logo looks to me like the one eyed celebs as with the top Gaga image - there are plenty more on POM. What do you make of the top Savile image on my last post - hermetic ?

I had an acquaintance who was in the Scottish Socialists with Sheridan etc, said they went all "animal farm" once they got elected. There have been another two incidents in the Royal Mile this week, will post about them over the weekend.

Moon, cheers, I got the kip, but could not think of anything relevant. You have.

Yeah, the master race, whaes like us ? Note that the Farage thing seems to have exploed a bit, he has been on the BBC a few times.

Also Aangirfan, some say that the KJV Bible is Luciferian in itself, in terms of controlling the "masses".

Last post - Savile - hermetic ?
A half-hearted attempt, yes, though the picture seems to be mirrored for true pose.....but pointing finger, closed hand and 'central' belt are all there.