A couple of weeks ago I noted the how the Church of  Scotland - The Kirk - wish, if independence is successful, to have Prince Charles crowned separately as King of Scots at Scone Palace on the alleged Stone of Destiny. (Pennies from "Heaven")

Today the BBC reports how a monster storm has erupted over a 10 page report, produced by the Church of Scotland, which questions the "divine right of Jews to the land of Israel". Unfortunately, the Church appear to have now removed the document - The inheritance of Abraham ? A report on the Promised Land - from their website, although some parts can still be gleaned from the article whilst  a full transcript is available here.

The report, which was compiled by the Kirk's church and society council, stated there has been a widespread assumption by many Christians, as well as many Jewish people, that the Bible "supports an essentially Jewish state of Israel"

But its authors said an "increasing number of difficulties and current Israeli policies regarding the Palestinians" had led to this viewpoint being questioned.

They wrote: "Possession of any land is clearly conditional. The question that arises is this: Would the Jewish people today have a fairer claim to the land if they dealt justly with the Palestinians?"
Biblical promises about the land of Israel were never intended to be taken literally, or as applying to a defined geographical territory, the report argued.

Instead, it said: "They are a way of speaking about how to live under God so that justice and peace reign, the weak and poor are protected, the stranger is included, and all have a share in the community and a contribution to make to it.

"The 'promised land' in the Bible is not a place, so much as a metaphor of how things ought to be among the people of God. This 'promised land' can be found - or built - anywhere.

Obviously, the "Jews" are outraged, whilst the report is scheduled to be discussed at the Kirk's General Assembly, later this month.

Something else intended to be debated is the issue of homosexual ministers. It appears that this is a contentious issue, causing fractures within the church. So much so that the former Archbishop of Canterbury, Rowan Williams, last week on the eve of a visit to Scotland, urged that ranks should be closed on this matter and that no one should "walk away". From the Scotland on Sunday:

In the 1930s, divisions over how to respond to the rise of Nazism did not split the church. “That I would have thought is a pretty serious division of opinion,” said Williams. “The question of am I allowed to kill people, is at least as important as am I allowed to sleep with certain sorts of people


As I have said before, my understanding of the elite "game plan" revolves around ritual and alchemy.  A new "Golden Age" beckons, a New World Order - a monstrous United Kingdom. Scotland is important due to ritual : Bible reviser, James 6th and 1st being crowned here first before amalgamating the United Kingdom. In order to reproduce more "gold", on a grander scale, matters have to go back to base, i.e. Scottish Independence. Throw Princess Scota and the Stone of Destiny into the crucible, and one is almost there.

Thus the church/Kirk seem to be helping my theory along, to a certain extent, with their ten page report; as indeed does Rowan. 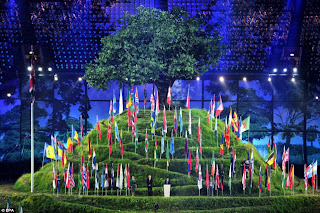 Posted by Newspaceman at 18:11

The Jews are very powerful in Scotland.

I think this is it, but I've not read it to make sure.


Of course the whole idea that God hands out favours or parcels of land to certain groups of people is totally absurd and childish.

I mean talk about 'conspiracy theory'!

Thanks Aangirfan, indeed they are, both crypto and "real". I am close to someone who is Plymouth Brethern, they believe themselves to be God's "chosen ones" too. Thus, they have a sort of disinterest in world events as they believe they will be "taken away" before the "end". My understanding is that John Darby - founder of the Brethern - was an early promoter of rapture "theory" which he based on his meetings with a Scottish girl as far as UI can recall. I don't like to involve myself too much in it.

Moon, thanks, have updated with link to full report, much appreciated. It's not shy. Thanks for the 126 "enigma". I still stand by the sentiments of my Andy Murray & his Mum, Alex Ferguson & ram-headed Lady Gaga wine quaffing Dionysus post :

Coincidental to your linking to 'wine-women-and-song' -

Same sort of thing happening with Mary Queen of Scots :