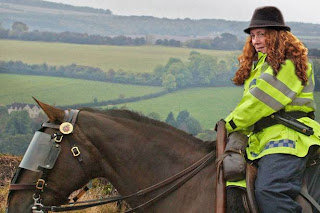 I touched on the Scottish based Disney Pixar film, Brave, some ten days ago in my post, Bear King Mad, noting the physical resemblance between the heroine, Merida, and former News International boss, Rebekah Brooks. In the film, Merida "defies an age old custom" thus "unleashing chaos", whilst Rebekah herself has to a certain extent it appears defied an age old custom - privacy - and to all extents and purposes unleashed chaos, certainly in terms of future censorship of the media. That's notwithstanding the Rupert Murdoch/Scottish Independence malarkey.

Yesterday showed up another correlation, admittedly potentially coincidental, as we read of how the Disney film is to hold it's European premier on 30th June, in Edinburgh at the Film Festival, some eight days after the sun-drenched solstice timed US release. Meanwhile also yesterday, Rebekah Brooks was arrested re the phone hacking after a dawn raid by police. 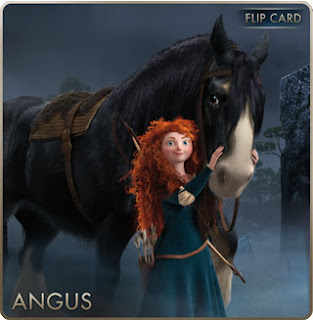 The Stone of Destiny too made it into the news just the day before, the Daily Record noting how the Covenaters Inn in Aberfoyle is to be refurbished; the connection being that the stone was allegedly hidden there in between being repatriated from Westminster on Christmas Day 1950 and being left on the steps of Arbroath Abbey on 11th April 1951, the 101st day of the year and another - if Christmas was not enough - most symbolic day in terms of Prince William, given he received his "wings" from his father on this day in 2008.

Curiously yesterday, the 13th of March, is the anniversary of the Dunblane massacre, something which also ties in with the 11th April via a letter send just after the atrocity to Lord Cullen alleging freemasonic persuasion in regards to the perpetrator, Thomas Hamilton. Notwithstanding that, the school gymnasium - scene of the carnage - was demolished on 11th April the following year. (Diverting a discourse - a ruse)

Daily Record - Stone of Destiny.
Posted by Newspaceman at 13:54