It's unseasonally hot here in Edinburgh, thus sweaty tourists visiting the Castle will be delighted to note it has it's own on-site ice-cream van, decorated with rampant lion head and a remarkable (given this blog's sentiments) registration number: WMS 666 T. 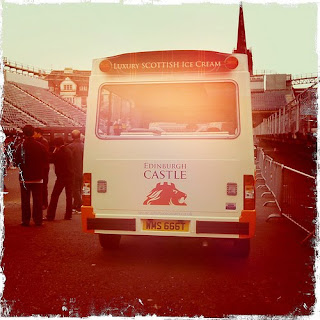 cheers
Posted by Newspaceman at 12:33

The WM invokes WilliaM while the S will have to do for the possessive. T is always T -

Also its the 'brew' which may be the destination for RFC, a now decapitated 'lion'.

'Brew' as in on the dole , though I assume you guessed that.

I've mentioned on my blog the importance of Shakespeare in 2012 (Olympics) and MacBeth in particular (BATman [Dark Knight], NEWT Gingrich, Year of the DRAGON, bells, etc.)

Moon, thanks. The roulette numbers 1-36 add to 666 too, 36 being 6 squared. The Williams T was the way I saw it too when I saw the van driving along the road yesterday. MacBeth, according to Downard, is most important in terms of the whole caboodle. Brew - got you.

Jeff, thanks, have'nt read you'r blog yet, but will shortly, still have your questions to answer, half way there but have time tomorrow and tuesday. Some of the Batman was filmed here (Scotland) I think, but will need to verify.

Yeah, it is a melting pot alright.

Note that a Olympic run was undertaken yesterday in London, opened by Princess Beatrice, the runners finished to the tune of Chariots of Fire, a film with heavy connections to Edinburgh, Scotland and indeed British Israel (William Blake, Jerusalem, -"Bring me my Chariot of Fire" - the original Biblical quote from 2 Kings, 2-11 )