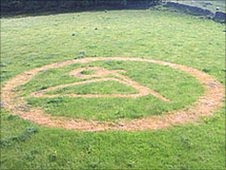 The Queen today made her first visit to the Wimbledon grass court tennis tournament since 01/07/77, some 7 days short of the 33rd anniversary, Her Majesty favouring the Scotsman, Andy Murray, as her spectacle.

Meanwhile eldest son Charles made the first "Royal" visit to the dairy farm sited Glastonbury Festival - it's 40th - in particular the Pyramid Stage where he made a brief appearance. Additionally, he met up with rock star turned farmer, Alex James, the latter less well known for his interest in space exploration - he sponsored Beagle 2, and the "festival's emerging talent winners", My Luminaries, who's debut album was called Order from the Chaos, roughly translated into Latin as Ordo Ab Chao.

Meanwhile up in Scotland, along with the Battle of Bannockburn anniversary (where the Knights Templar are alleged to have given a hand to the Scots), it is the agricultural Royal Highland Show at Ingliston on the Western outskirts of Edinburgh close to the luxurious and mammoth Royal Bank of Scotland headquarters. I have commented before on the fact that it is entirely possible the Scottish and/or Templar army camped at this location en route Edinburgh - certainly the English fled in this direction and that perhaps the show, which was originally held at Holyrood, is some sort of occult ritual. (See yesterday's post for link on battle / Sirius / Templars)

Whether it is or not, it is interesting that today we read of tycoon and Glasgow Rangers chairman, David Murray, and his plans to develop the surrounding lands of Ingliston as some sort of "green gateway" to Edinburgh. (David resonates alchemy, given he made his millions/gold from scrap metal) From the Daily Record:

Murray Estates' vision includes 3500 homes, a sports village, a 25,000-seat stadium and a network of parks.

At the heart of a west Edinburgh "Garden District" is The Calyx, which the developers hope will become a centre of excellence for horticulture training and education, including gardens, displays and play areas.

The ambitious scheme is earmarked for land close to Edinburgh airport and the redeveloped Ingliston showground.

The 3500 new family homes will help address existing shortfalls. There will be an emphasis on each household growing their own fruit and veg.

Now, I may be wrong here but heard a few years back that at the centre of Murray's land stands a reasonable plot, once the home of George Boyd Anderson, a wealthy philanthropist. It is named Suntrap after it's owners pioneering work in the use of solar energy and insulation. He bequeathed it to the National Trust on condition (as far as I am aware) that it was only to be used for horticultural training purposes. Since 1984 it has been looked after and maintained by Oatridge College in this respect. It would appear that Mr Murray only got permission for his planning proposal on the grounds that he kept the educational facility, although that may be speculation on my part.

Today we read of a most unusual occurrence. From the BBC, Crop Circle appears in Lothian college grounds:

A Lothian agricultural college is investigating a "beautifully executed" crop circle which appeared in its grounds overnight.

The 30ft-wide circle is a depiction of the logo belonging to Oatridge College in West Lothian.

It appeared in a remote field on the Oatridge estate on Wednesday.

Apparently students are being blamed, however lecturer Joy Miller stated that:

"It's beautifully executed and the circle is perfectly round."

She added: "We think that it's a student prank using some sort of weed killer, but the surprising thing is that on a campus swarming with students, there hasn't been the slightest whisper about who did it or how it got there.

"The closest thing we have to evidence is a couple of reports of lights being seen during the night in the general direction of the field.

"That makes it even more remarkable that someone could replicate the college logo so accurately, if they were working by torchlight in the dark of the countryside." 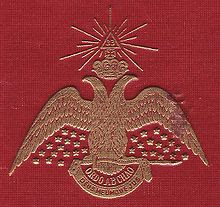 Summing up, we see the Queen choosing to end a 33 year absence from Wimbledon watching Scotsman Murray, whilst her eldest son appears on the Pyramid, meets a celebrity turned farmer, and mingles with an Illuminati resonating named band, their album title appearing, translated, on infamous Luciferian freemason Albert Pike's "Scottish Rite" book as per image. Meanwhile up in the heartlands, David Murray, chairman of "Orange" team Glasgow Rangers, unveils his template for a new green village in the centre of which stands a - donated to education by a philanthropist - solar related "garden", these events all on the same day (Bannockburn anniversary) as the commencement of the annual, Royal Bank of Scotland sponsored, Royal Highland Show. A "crop circle" appears, unlike the norm this one scorched, bearing the logo of the caretakers of the "solar garden" - a logo which shows the sun, a pyramid shaped hill (Binny Crag) and a shepherd's crook.

Thus, we are being farmed, you can guess who the farmers are.
cheers

Image is from the cover of Albert Pike's Morals and Dogma of the Ancient and Accepted Scottish Rite of Freemasonry, note the double headed eagle / phoenix/ sun bird/ Prince William.
Re Binny Crag - "The name Binny for this area is said to have come from a peasant, William Binnock, who was granted an estate by Robert the Bruce. This reward was for Binnock's brave deed of re-capturing the Castle of Linlithgow from the English in 1313, Binny House and lands are thought to be the remains of that estate." Bannockburn was the year after.

That's so weird, I've just posted on my blog about crop-circles, then I visit your site and read about them. I didn't hear about this new until just now!

Hiya Marie, It is the first up here that I am aware of, although I confess to not scanning for similar stories. It is more the synchroncities that interest me in terms of the twin Murrays etc.

Some items I did'nt put in were the connection between tennis Murray and Dunblane - he was a pupil at the school when the massacre occured and a lot of speculation was raised over whether there was a masonic connection with the perpetrator, Hamilton. So much so that Lord Cullen (Lockerbie enq) received an anonymous letter stating this, dated 11th April (11/4). This was also the date chosen to demolish the gymnasium, scene of the carnage. It is also the date Prince William got his wings and the date that the Stone of Destiny was returned to Arbroath Abbey after being stolen. If you Americanise that date we get 4/11, Independence Day (lol, I trust you know the score with that nonsense). Also see James Shelby Downard KK33, re that date and JFK.

There has been two "UFO" incidents very close to Binny, one "the A70 incident", the other Bob Taylor, a forestry worker who was "abducted" at Dechmont Law, maybe a mile from Binny as the crow flies. The latter saw a huge police investigation, given the circumstances - which are compelling. These are both on wiki I think, or easily found.

Anyway, thanks for taking the time to comment, your blog is very well written (I suppose it should be) and I share the same sentiments on the corporate race etc, something that our friend LVB seems to have neglected in his meanderings.

All the best, thanks again, brian

Brian, it is all so weird because before I knew anything about the illuminati/masonic stuff, and the synchromysticism, I would never have noticed all these links. I have been a bit freaked out by it all since discovering yours (and others) websites over the past few months and putting it all together - seeing it with new 'eyes'!
P.S. 1996 was the year I left the UK..I remember that I was still in Bristol and sent flowers to the Dunblane school with Interflora...all the pictures of the children affected me enormously although I have no personal connection to it.

P.P.S. I forgot, there is an ongoing 'ufo flap' in Stirling, which has had widespread coverage and it continues. Scotland has had its fair share of the unexplained! ;-)

Cheers aferrismoon, note the date of the elections and electoral reform for next year: 5/5.

I think it is Bonnybridge and the triangle that you are referring to Marie. It is just the other side of the Bathgate Hills.

most of the elements described in this post indeed are part of a ritual operation, no question -- cerelean, clearly ... plants and grains "trap" sunlight


the queen is the external representative of the demetrian/cerelean grain-goddess whose presence, demands, appetites and rites dominated the past ten millennia

yr productive dwelling on the name "Binny" guides us unerringly to the ever-unfolding american version of the Endless Eve-Ill Drama, centered at that solar plex of Heartland America ... Chicago, home of Babylon reborn (Pharaoh Obie, wife Michelle aka Queen Tiya, whose power/political base btw is centered in Chicago's South Side ... plus Isisian Oprah Winfrey, etc. etc. barf)

Templarism, esp the Portegee variety, figgered prominently in that post, you may wish to review for further, ah, consistencies

cheers then i'll try to catch up w/yr later posts as circumstances permit, and comment praps