Having a whale of a time 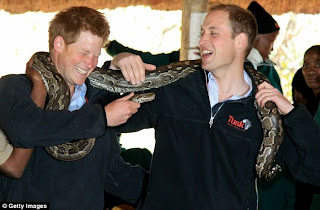 Charming Princes, Harry and William - the latter taking a break from his "intensive helicopter pilot course - yesterday visited a nature reserve in Botswana as part of their charitable "official tour" of Africa which happily coincides with the World Cup.

Main angle reported by the ever-accommodating media seems to be the fact that the pair of them paraded with a python, as depicted.

Today saw Wills solo, visiting Maun in Botswana where he bumped into teen-singer, Joe Jonas, to view a project called Coaching for Conservation - a curious combination of "football training and wildlife protection".
cheers

I see Apep has finally made an appearence. Ra, Set and Apep, or perhaps its their real father

HI there - I like your blog - saw you over at Pseudo Occult Media. You made an interesting point re: LVB on your last comment there. I'm interested to see his response. BTW - I don't know if its because I am now clued into this stuff, but as soon as I saw the Princes with the Python I immediately started thinking of the occult connections...never would have before! Are you familiar with the old rumour about Prince Harry's real father?

Thanks aferrismoon, that slipped right by me.

..., will see what he says, was not trying to have a go, just curious. I know about the Hewitt story if that's what you refer to, here is an interesting post about Diana's potential "jewish" bloodline:

Thanks to you both for taking the time to comment, appreciated.