President Arthur - no bones about it


Its rider held a bow, and he was given a crown, and he rode out as a conqueror bent on conquest 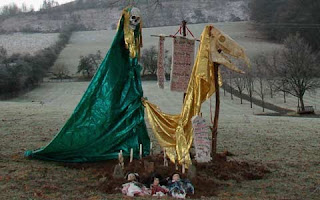 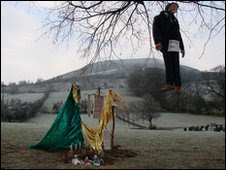 Further black magic matters are at large in Scotland it appears as we read from the BBC on Thursday of how an effigy of Scottish First Minister and Scottish National Party leader, Alex Salmond (pictured below), was hung from a tree in the shadow of which lay a horse's skull mounted on a wooden cross, three dressed dolls in a makeshift grave and what appeared to be the draped figure of a human skeleton. (Alex Salmond effigy hung in crematorium protest) 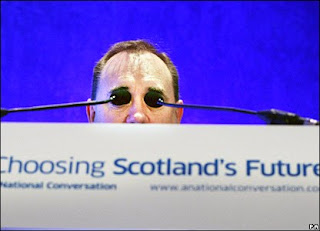 The macabre scene greeted Sunday visitors to Wairds Cemetery, historic Melrose, in the shadow of the Eilden Hills - reputed to be the burial place of King Arthur and indeed some say the location for the whereabouts of Thomas the Rhymer during his period of hostage in the fairy Kingdom. Wizard and philosopher Michael Scot is said to have cleved the volcanic rock into three.

Given my last posts regarding Prince William and his inaugural presidential duty at the Obafta's, followed next day by the blind archery, this appears to be some sort of related ritual. For it could be said that Salmond is acting "King" of Scotland (see King Conn re Stone of Destiny/Sean Connery) in his political capacity, and indeed I have theorised often that Scotland is of high importance in terms of occult ritual and alchemy in the creation of the "masonic" New World Order and related global "Golden Age". Salmond obviously is dead in the scene, hanging from a noose, reminiscent of the penalty of breaking the masonic oath; the horse's skull and Williams archery surely resonating Sagittarius and the centaur - home of galactic centre, whilst the cross perhaps similar, given the almost imminent Mayan calendar end date, commencement of the astrological Age of Aquarius and related notable planetary positions. The identity of the three "dolls" in a grave have me slightly baffled, more information on clothing, gender etc. would be beneficial, although we know from James Shelby Downard of the three masonic assassins/unworthy craftsmen. (King-Kill:33)

The skeleton here is represental of Prince William - potentially the "reincarnation" of King Arthur - rising to become King of Scotland first, before the rest of the globe. The controversial issue of the "crematorium" - alleged to be the reason for the satanic display - reinforces the concept of death, whilst the inferno involved in this type of cadaver disposal brings to mind the phoenix and it's mythical rebirth.

The location of Melrose is worthy of more speculation. The "rose" in the name resonates the infamous ley-line, whilst in Melrose itself, a casket containing the shrivelled heart of warrior King, Robert the Bruce, is buried - the heart the organ used for pumping blood round the body, blood highlighting the Orange bafta vampire star, Kristen Stewart, noted earlier this week in Old habits die hard. Note too, the town on a map copied from Jeff Nisbet's spectacular Pyramids of Scotland article where he theorises that Scotland was part of Atlantis and indeed the "Scots" emigrated to Egypt, establishing civilisation there after some type of homeland global disaster:

" Interestingly, I later discovered that if the line is continued far to the south of Melrose it arrives, unerringly, at Glastonbury." 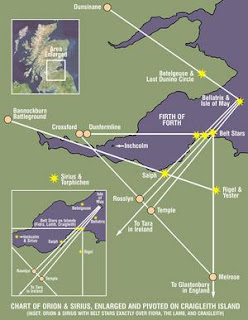 Glastonbury, amongst many other things, being heavily connected with St. Dunstan who studied there under monks as a boy, before becoming Abbot. 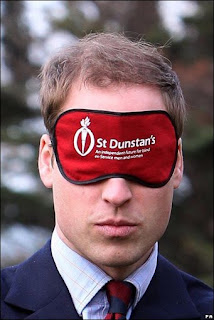 Could it be the case that this elaborate, dark, voodoo-like ritual has nothing to do with a crematorium protest, instead is a symbolic portent of Salmond gaining full democratic "independence" for the Scottish nation, yet to be "assassinated", perhaps politically, perhaps economically, perhaps revolutionary, perhaps all three - his Holyrood (in the shadow of sphinx-like Arthur's Seat) "crown" landing squarely on one day World President William's head - a necessity in terms of ritual given the Scottish root of our current Western civilisation and economy although, if Jeff is correct, a far more ancient precedent was set.

cheers
Note from the comments below that Amy Williams, who won a gold medal in the skeleton event at the Olympics last weekend, rode on a sled called Arthur.
St. Dunstan
Posted by Newspaceman at 12:16

Also the Skeleton was Britains gold medal at the Olympics.

Does a horse-skull supply shop exist or do people keep them for years just in case their needed.

The gold won by Amy Williams, 27, her sled is called Arthur. Could'nt make it up.

Also aferrismoon , this is an interesting story about a winged statue of St. Michael in Dumfries (Burns etc.) which has been restored somewhat and now resembles Michael Jackson with his hand on the crotch image.

I would post but can't copy the
photograph again.

Note the serpent & the time on the clock - bearing in mind 3's.

As always, great stuff. It gets weirder everyday.

You can save a copy of the Michael Jackson pose now if you want, I put it on Flickr.

Thanks for that NGA, have saved it and will try to write a post next week. Don't know how you managed to copy it though ?

Wow , it really is called Arthur, no, u can't make it up.

Saw the pic of Michael

A Hebrew dictionary translates it as ' Kingdom, Monarchy'

apparently the demands of Full-time synchromystization have infringed on the outpouring of his spirit, meaning tommy's spirit ie posts, though am i to understand that he no longer resides with sister and insensitive friends?

Cheers Kal, thanks for the info.

AFM, thanks too, just posted re Jackson.