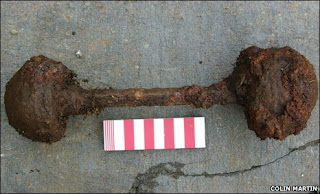 Well, certainly the media appear to be, as yet another two stories have been kindled regarding the historically ultra-important Jacobite/Hanoverian battle which took place in the Scottish Highlands back in 1746; the one discussed very recently in regard to the scotch egg devouring.

Both are from the BBC, the first from Monday, Clues to Culloden friendly fire, details theories from a new book regarding the battle as noted by editor of the multi-authored text, Tony Pollard, who noted, most importantly of all in my opinion:

"Culloden still has secrets to give up."

The next tale, wherefrom the top image is sourced, Ship's weapon dug up from garden , details the unearthing of a bar shot - an ancient Royal Navy missile - from a house in Fiunary, some half a mile from the Isle of Mull. This leads to more, unsubstantiated yet dogged , speculation from various sources.

My old but recent posts, regarding HM Queen's visit to the battlefield and the aforementioned picnicking outrage, can be found here and here. 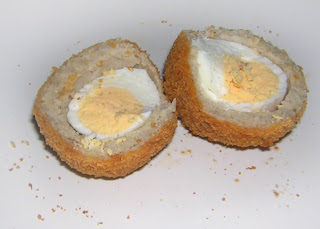 Note too the Knights Templar colours on 16 striped, scientific, measuring instrument within image.

To bury one's bone is a masculine colloquialism for engaging in sexual intercourse. A scotch egg is, perhaps, a phoenix.
Posted by Newspaceman at 18:10

Email ThisBlogThis!Share to TwitterShare to FacebookShare to Pinterest
Labels: the lion's bollocks