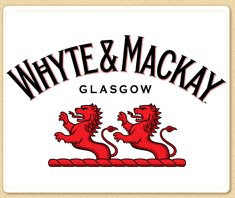 I confess that my last posting regarding the military land-rover crash may seem rather obscure and pointless yet, in the grand global scheme of things, it ties in very nicely with another news story from today.

What firstly needs to be remembered is that Jaguar Landrover are no longer a British entity after being bought by an "Indian" company called Tata in March 2008. As an aside, but cute, synchronicity, Jaguar were originally called the Swallow Sidecar Company and founded by a Mr. William Lyons in 1922. The policeman who filmed the big cat as noted in my post from last Tuesday, Cats out the bag, was called Chris Swallow.

On that theme - a swallow (or swallie) being a colloquialism for having an alcoholic drink - we note from the BBC today, Whisky staff facing 100 cuts, that Whyte and Mackay are to cut further jobs throughout the country. Whyte and Mackay (lion logo pictured above) were bought by an Indian billionaire, Vijay Mallya, in May 2007.

W&M are of course not the only Scottish whisky giant to be shedding jobs, Diageo, who own the famous Kilmarnock founded Johnnie Walker brand , recently announced they were to close the bottling plant -still based in Kilmarnock, resulting in 900 jobs losses. Walkers's once had an advertising slogan "on the square", resonating freemasonry.

To understand more fully what is going on here we must go back in time, to January 2007, when we saw then British chancellor and gold seller, now Prime Minister, Gordon Brown, speaking on a visit to India. From the BBC:

Stressing the importance of trade links between the two countries is expected to be a key theme of his visit. India is now the third largest investor in the UK, with more than 500 Indian companies opening offices there.
Which is exactly what we have seen, indeed are still seeing.
All that is happening, in reality, is that the "commonwealth" of the previous "old world", a wealth created in no small part due to the exploitation of poorer countries, is now being more commonly distributed. We in the "West" though will have to accept poorer conditions and poorer jobs as a result. Additionally, the government/state borrowing, which has been used to "refloat" the economy, will be an on-going burden. Note though that the very rich, will remain so.
An important aspect which is often overlooked is that of the alchemical process to create gold, which demands that all the materials used are in their base state. As we approach this new "golden age" for humanity, to be celebrated in 2012 with a new world-King-William, it is interesting to note happenings in Scotland, which was in effect, the base camp and starting point for the freemasonic building of this, rapidly fading, " old world", and will be the model for the new one - where we are all basically the same - enslaved - and there is no scope for human deviancy in whatever regard.
Of course there are others who would contest that 2012 , the end/beginning of the Mayan calender and the commencement of astrological Age of Aquarius, is the time when we shall see a new spiritually based collective ascension for humanity. 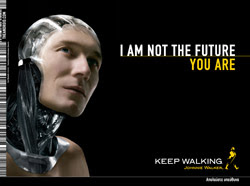 All I can say is make mine a double.
cheers
NOTE : The striding man from the Johnnie Walker brand used to, historically, walk to the West. Now, since 1999, he walks to the East.

See too, Spirits, can you hear me.
Posted by Newspaceman at 16:18

That last image is chilling. "We're not going to be robots... You are"

I first noticed the Johnnie Walker thing while observing a golf magazine in my bathroom. The ad was a 2 pager, completely comprised of blue and gold. It showed people whose existence was manifested through the drink itself (the blue was the background, the people were formed by the gold liquid). I think they were playing poker or just gambling in general.

(and, of course, JW=33, as if the master mason in their logo wasn't obvious enough)

but he understood that medieval alchemy was based in far older systems, and that it modeled the collective psychological designs of the future.... and not merely the near-future

the plans of certain hermeticists/masons are now evident in the realities of modern life -- they built not only edifices around the globe, but mass ideo-social constructs, which are now far advanced, yet always unfinished (w/o capstone)

and as the name reveals, it's a multi-millennial "back to egypt" movement

the bible warns repeatedly against "returning to egypt" in specific connection to these processes, hidden or occulted from the average person

the profusion of male/female conuinctio illustrations and techniques in alchemical manuscripts, e.g., has served as a practical guide (with pictures!) for Dreaming Mind poli-psy psorcerers particularly during the past century -- apparent in both the takeover in the west of matriarchy, and in creation of the dialectical Third Thing from the "base" genders of male/female

One of the most noticeable props in 'Quatermass and the Pit' , the film, was the Johnny Walker poster down in Hobbs End Tube Station.
It was in shot quite a lot for such a wee thing.

Q and the Pit , worth downloading, some interesting dialogue and ideas.
When they find the spaceship the Army bod says that it was probably Nazi propaganda - I don't know if people related spaceships with Nazi technology in 1964.

Most already are Tommy, that is the most frightning aspect. JW symbolises an early conquering of the world to a certain extent, in the terms of marketing and sales.

Cheers Ray, remember that William personifies his mother, thus, to a certain extent, is androgenous.

Aferrismoon, this is from Monday

: Robots that can decide where to kill, who to kill and when to kill is high on all the military agendas," Professor Sharkey said at a meeting in London.

hadnt considered it, but makes sense, if one posits he is overshadowed by mom (and granny the queenbee)

reminds me of our obie wan mymommy -- he is overtly androgynous in appearance, demeanor, psychology, politics, and nature

bowled a 37! for goddess sakes!

the ancient mother-son cults, extant on the isles of course, were draconic

all sons were only satellites, servants, to the Mother