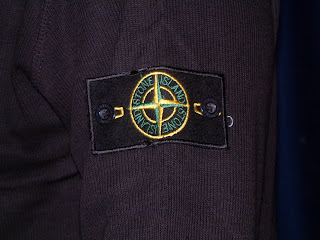 The voice of Oi! is calling you
With a message that is true
Punky herberts straight and skin
All of you come on in
Cos Oi's for skins and Oi's for punks
It's fun and fury, real urban funk
The voice of Oi is unity
The beat of the street is you and me
United is the thing to be
United against society
Think how strong we can be
United against society
Back in '84 - '85 , maybe the season before, a new phenomenon hit Scottish society, the notorious football casual.

Born from a post punk, Oi birthing, era, the casual hated the world and displaced his internal anger through the, media glorified, vehicle of football hooliganism - fighting other cunts like himself every Saturday. In the process, he attired himself - it was a masculine pursuit - in some of the most expensive clothing available, the latter changing fashion on at least a monthly basis.

I had a good mate who had "run with the mob" in the year quoted, and retired, aged 19, citing family problems as the get out clause. His mum was going to throw him out. He summed it all up: "out of 500 boys, maybe 35 are up for it, the rest are just sheep".
The casual has remained within Society, albeit never on the same scale as those early days.

However, today we read, somewhat reminiscent of Gary Oldman's first class, The Firm, of a Casuals United and a lawful anti-Islamic protest in Birmingham with 33 arrests. 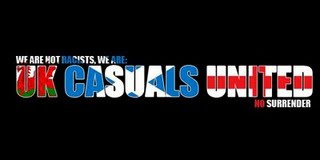 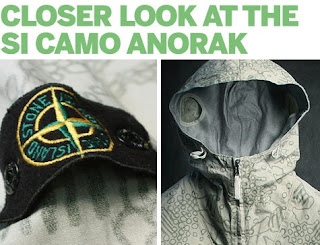 cheers
Poem from Garry Johnson.
Posted by Newspaceman at 16:45

I got a few friends who are 'skins'. I agree with what you said about them. I never realized how expensive there clothes wear until you mentioned it. I figured most of them would have hung up there boots by now but the power attained through wearing the garments must maintain the novelty for them. Its pretty easy group to join. Wear the clothes, work hard, play hard, be proud of your past ect.

"Skinhead" is a loaded term as well. Most people(i think) associate them with being racists. But it splits off into many subclasses. SHARPS comes to mind.

Aha , the EBF , English Border Front. Hoolies from Shrewsbury, been doing it for years, Quite a big crew, often involved in English hooligans abroad.
People say that they have contacts with the League of St.George.
I used to live in Shrewsbury, they had protection rackets on the pubs. They'd go in for a drink and trash the place.
I really wouldn't say they were 'skins' , 'casuals' , or just 'The lads'

As far as hanging up their boots, often the fighting is secondary to selling drugs, organising life on the housing estate , and the aforementioned protection.
Doubtless they do faux-civil disturbances if the police pay the right price.

Where any movement has 'Unity' expressed in it then, please, give it a wide berth !!!
There is more to this statement than seems necessary at this point.

Hiya Jon, yes, bang on - although it's a sort of "progression" from skins, football violence orientated.

aferrismoon, it's all a ploy, NF, BNP, C18 etc. etc. - they weed out the real nutters that way. I got some info from a blog called lionheart who proudly displays his photos of the Queen and posts about the Knights Templar etc. He obviously has not thought too deeply about the future and rather concentrates on hating muslims as far as I can ascertain.