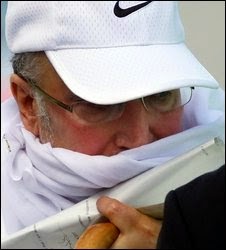 cheers
Posted by Newspaceman at 14:23

911 via Hebrew letter-numbers = RAShYTh, which can mean 'beginning'. That word is found within BRAShYTh , the first word of the Bible/Torah, which is translated as 'in the beginning'.

111 enumerates ALPh, Aleph, the first letter-number of the Hebrew Alephbeyt.

Via Carlo Suares, he , to my mind, describes BRAShYTH as the container of Aleph, and seems to imply that people shouldn't build 'containers'around it or it'll bust open the 'temple walls'.

The aleph character has a whirlygig type shape.

Aleph seems to be the 'god' of that alphabet, as the initial letter and enumerating the trinity '111'.

Anyhow we've more 'laws' than Leviticus and perhaps it has lead to things slowly breaking apart at the seams.

It appears that we will never contain God.

thank you for all yours posts I really enjoy the view you take.

Hiya Moon, thanks, 911 certainly seemed to be the beginning of something, let's hope you are on to something else too..

Anon, thanks too, I should really do better but sometimes it is a bit of a struggle.

11 sept is 1st Thout and beginning of the year in the ancient Coptic calendar
https://en.wikipedia.org/wiki/Thout

2001 was the beginning of the new millennium, not 2000 as the profane were led to believe.
http://www.timeanddate.com/counters/mil2000.html