Many people believe Scotland is a magical place.

For example, allegedly, the infamous occultist, Aleister Crowley, purchased Boleskin House on the shores of Loch Ness as he believed it was the focus point for "magical energies" of the Aeon of Horus, similar to Jerusalem in Judaism and Mecca in Islam. (wiki).

Nowadays, in a less occult manner, Loch Ness is focused upon primarily because of the alleged monster which appeared some 20 years after Crowley deserted his Scottish abode. Yet, if Crowley was correct, then the "energies" must still surely linger. One wonders if the visitors and monster hunters are affected, or indeed whether the energies are manipulated by the daily dose of human attention.

In a potentially similar manner, Greyfriars Kirk, and it's grounds, also feature prominently in modern Scottish history, firstly given Greyfriars Bobby, the faithful dog who allegedly sat at his master's grave in mourning till his own death. Earlier last week, the BBC reported on how the nose of the Bobby-dog statue was being restored as apparently it has worn down with tourists and visitors rubbing it for magical "luck". The same article concludes that the legend of Bobby is somewhat bogus, he did exist, but not in the manner romantically depicted.

On Friday, 4/10, it was reported that the restoration work to Bobby's bugle had vanished overnight, as if by magic. Vandals are being blamed. (BBC news)

Fort Augutus Abbey, on the banks of Loch Ness, hit the headlines recently, given systemic abuse carried out by monks on the premises. It was built in 1880 on the site of an fort erected for the suppression of Highland Jacobites. The Jacobites were loyal to the House of Stuart, an allegedly Catholic, royal dynasty. The Abbey is constructed around the form of a quadrangle.  Terry Nutkins, a BBC TV wildlife man and host of TV show, Animal Magic, purchased the Abbey after the monks had vacated.


Terry was mentored in Scotland from age 12 by a chap called Gavin Maxwell. Gavin was cursed by a half-Scottish lady called Kathleen Raine after rejecting her sexual advances given his homosexuality. Kathleen was intimate with esoterica, and indeed with Crowley's "work". Kathleen's curse appeared to function as Maxwell's house burned down not long after her dark ritual. Maxwell left everything to Nutkins on his death.  Last January, Nutkins' daughter, Jennifer McMillan,  "cheated death" after her car rolled down an embankment at Loch Ness, not far from "Crowley's" Boleskin. One wonders if Terry left everything to Jennifer.  (Animal Magick)

A couple of posts ago - Dark Arts - I noted of how Harry Potter fans are flocking to Greyfriars Kirkyard to leave notes for Lord Voltermort, as they believe that the gravestone for a Thomas Riddell was the inspiration for occultist and philanthropist, J.K. Rowling's, character.

Greyfriars Kirk was where the Covenanters - the Presbyterian "enemies" of the Catholic supporting Jacobites, who took their name from the Biblical covenant sworn by Israel in the Old Testament and nothing to do with a witches' coven - signed their declaration in 1638 in front of the pulpit. 41 years later, 1200 covenanters were imprisoned in the kirkyard pending trial. From wiki, History of the Jews in Scotland:

Reverence for the tenets of Judaism was a hallmark of 17th century fundamentalist Protestant thinking when the National Covenant of 1638 seemed to set the seal on the belief that by returning to the "true religion" at the Reformation the Scots had become a chosen people.

Scotland, whom our Lord took off the dunghill and out of hell and made a fair bride to Himself... He will embrace both [of] us, the little young sister, and the elder sister, the Church of the Jews. (Rev. Samuel Rutherford)

There's a pub (a bar) in Edinburgh named after George Heriot. It's called Jinglin' Geordie, which was the nickname given to Heriot because his pockets clinked with coinage. In 2009,  Oasis' Liam Gallacher payed a visit to the premises. He was interviewed by the Scotsman at the time, and noted that he found the Scotttish capital city spellbinding : "Beautiful, amazing, f****** biblical, in fact. Words can't explain it..." (here)

This week, pop-star, philanthropist, and potential MK Ultra victim, Rihanna, told of how Princess Diana has been the biggest influence on her style : "You know who is the best who ever did it? Princess Diana. She was like, she killed it. Every look was right. She was gangsta with her clothes". (mail on line)

Another top celebrity who worships Diana, and thus focuses her legions of followers upon her, is Lady Gaga. At her concert in Carlisle, some years back, she dedicated the track Orange Colored Sky to Prince William and Kate, whilst ending her performance with a track called Judas. Gaga has written a song called Lady Die, and apparently believes herself to be some sort of of "21st Century reincarnation" of the Princess.

Princess Diana is a Spencer, an offshoot of House of Stuart. Her mother resides in Scotland. Mohammed al Fayed, Dodi's dad, has an estate in Scotland and titles himself Mohammed of the Glen.

Disgraced BBC employee, philanthropist, and alleged necrophiliac, Jimmy Savile, owned a property in Scotland at Glencoe, close to the scene of the infamous massacre of the MacDonalds by the Campbells. The blood sacrifice was carried out because the unfortunate MacDonalds were late in pledging allegiance to their new monarchs, (Protestant) William of Orange and Mary. Although Mary was a Stuart, she was allegedly not a Catholic. Jimmy liked to use his ubiquitous cigar in the manner of a wand. Jimmy's golden coffin, which was later buried arse down at a 45 degree angle and encased in concrete, was carried by Royal Marines.

Glencoe has been used very recently for Bond and Batman movies. We saw Bond at the Olympics meeting the Queen, and we subliminally saw Batman too, given that James "Joker" Holmes carried out his massacre almost at the same time as the Olympic torch was abseiled into the Tower of London by a Royal Marine, Martin Williams, to be gratefully received by Dame Kelly Holmes. Batman has actually been to the tower, in an episode called The Bloody Tower, season 3, episode 13.

Freemasonry and it's rituals are allegedly rooted in ancient Egyptian occult practises. Current Freemasonry has it's roots in Scotland, Mother Lodge 0 being in Kilwinning. Freemasonry is global, and many of the "elite" appear to be "brothers". Many large, corporate organisations logos and symbols appear to allude to freemasonry. Ancient Egypt was an old "world order". One has to be "chosen" to become a freemason, one cannot simply apply.

Donald Trump's logo is below. I mentioned his mask on the Bobby statue earlier. It appeared on the autumn equinox, when light equals dark, in 2009. At the same time, in America, Trump had rented land to Libya's Gaddafi as the latter was attending a UN meeting. Gaddafi also met relatives of the Lockerbie bombing victims the same day. Some people believe that statues, obelisks, and suchlike, are not just randomly placed in city centres.  (A sandwich full of nonsense)

Only a catapult shot from Greyfriars and Heriots School sits Edinburgh Castle. Within it lies the (alleged) Stone of Destiny, which some say is (Biblical) Jacob's pillow stone. All recent British monarchs have been crowned upon it. On Christmas Day, 1950, the stone was repatriated from London's Westminster. On the 11th April 1951, the 101st day of the year, it was left at the alter of Arbroath Abbey.

Arbroath Abbey was where the Scottish Declaration of Independence (from England) was signed. The declaration asserts that (in the eyes of God):

Lord Cullen, who was overseeing the 13/3  Dunblane massacre enquiry, received an anonymous letter dated 11th April 1996, alleging that there was a masonic cover-up in regard to Thomas Hamilton, the alleged perpetrator of the deed (The Scotsman). On 11th April 1996, the school gymnasium - scene of the carnage - was demolished. (The Independent)

On 11th April 2008, Prince William received his "wings" from his father, Charles.

On 11th April 1689  the above mentioned William of Orange and Mary were crowned as joint sovereigns of the United Kingdom. 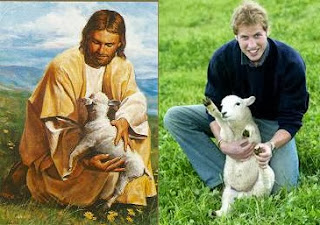 The "jews", whoever they may really be, are allegedly God's chosen people. My understanding is that if one delves into the Talmud, some fairly nasty evidence of their alleged superiority to the rest of humanity is evident. It appears they see the rest of us as unclean cattle; beasts. (Church of Nobody)

Last year the Church of Scotland were forced, after complaints, to rewrite a ten page report as it contained the lines (Crypto jew-ology):

"The 'promised land' in the Bible is not a place, so much as a metaphor of how things ought to be among the people of God. This 'promised land' can be found - or built - anywhere."

The solitary franchised ice cream van at Edinburgh Castle has the registration number WMS 666 T. Whether this is coincidence, synchronicity, magic, or prophecy, is anyone's guess. Whatever though, a New World Order beckons, with resultant solitary "king".

Whilst, in the background, in the spirit of colonisation, the Olympic torch heads into space. (mail on line)

Posted by Newspaceman at 10:04

HI, kind of off topic but then again maybe not! Lupo the black dog, I forgot all about him, until reminded today in tabloid stories about the Wales dog, and how he will be immortalized in a childrens book...OMG!

I am a descendant of the Scottish Heriot/Maitland family.