The brother of the dark one spoke last Friday whilst indulging in some charitable endeavors, "launching" a party of military-maimed amputees who are treking to the North Pole, albeit next year.

"Joking that he hoped he would be able to "keep up" with the team if he was able to take part, Harry, who has served in Afghanistan, finished by saying: "Good luck, and let's get an Army flag on the North Pole before my brother lands a helicopter there."

One wonders if Harry was hinting towards sun drenched Hyperborea, that mythical, Madam Blavatsky beloved place, believed by esoterists to be the original centre of civilisation and spirituality, or maybe just that Wills will, one day, be sitting on top of the world:

humankind does not rise from the ape, but progressively devolves into the apelike condition as it strays physically and spiritually from its mystical otherworldly homeland in the Far North, succumbing to the demonic energies of the South Pole, the greatest point of materialization

Or perhaps, bearing in mind cocaine and messiahs, Father Christmas, the ultra-generous snow-white-beared gentleman and his obligitary red suit. The below image says it all, note bottle patent date.

Potentially tying in with the Blavastky theories, and previous posts, we saw the Manchester CK police riot squad in action again yesterday - another English Defence League rally, another anti-facist protest. Whilst we await the 27/3 Lockerbie rising, we again see the flying of the SoD at the demonstration, plus... 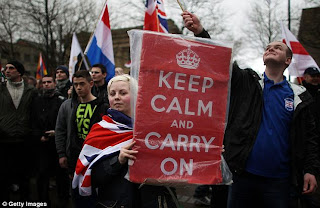 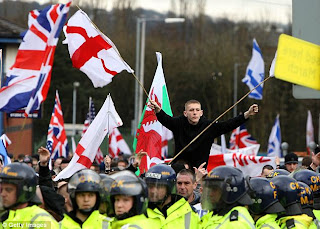 To close, a pair of Culloden related tales, the first from the BBC last week , Call for Battle of Culloden red coat memorial, the headline self-explanatory as we read of how a top military historian wishes some sort of commemerative item to be errected on site, marking: Writing in the National Trust for Scotland's magazine, he said little was known of those who served in the red coat regiments on 16 April 1746.

In the article, Mr Royle said some of the Duke of Cumberland's red coats went on to play a part in unpleasant aspects of the battle's aftermath.

However, he said the thousands who fought at Culloden should be remembered because the battle and regiments involved were important to the future development of the nation and the British Army.After first drawing a blank, a descendent of soldiers who served on both sides was found.

An examination of Inverness schoolboy Philip Nicol's family tree revealed three brothers of the Farquharson family of Allargue in Aberdeenshire.

Two were officers with the Jacobite army, while their brother fought with the government troops.

Those Farquarson's get everywhere, note this turn of the century stoneware butter crock with the date 1694 surrounded by what looks like the sun. Perhaps a reference to the founding that year of the Bank of England, together with the first ever war-based national debt. How things don't change. 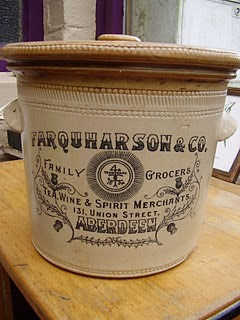 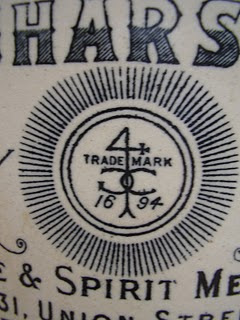 Then the second, another - in the same vein - self explanatory BBC headline : Opposition to red coat memorial at Culloden battlefield, another "outcry" from A Circle of Gentlemen, a modern day Jacobite sympathising organisation. Readers may remember these characters from the scotch egg incident, where a picnicker was apparently observed munching on a deep fried egg snack, whilst perched on top of a war grave. At the time I suggested that the tale was perhaps fabricated, the delicacy being metaphorical for Prince William - given the phoenix bird rises through the medium of inferno and indeed the importance of Scotland, ritually, to this . (image from A box without hinges, key, or lid) 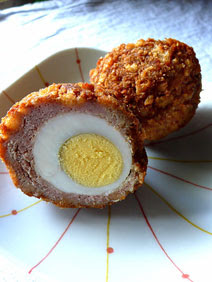 Posted by Newspaceman at 19:34