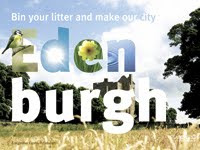 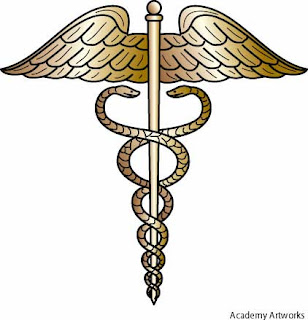 A pair of interesting, intertwined, stories from this week tying in well with the Prince William/nephilim/ 666 speculation, which nowadays abounds :

The planet Venus is highly regarded in gnostic/occult/mystery circles: the morning star, the light bringer, indeed biblical Lucifer1, the personified fallen angel/serpent who apparently advised Adam and Eve, or maybe just Eve on a hen night, of how the God(s) of the Old Testament Genesis had created genetically modified humans to be their slaves by crossing their own reptilian DNA with that of an ape-like creature (in the process surely establishing hybrid-vigour within the resulting offspring).

On Friday we noted how a small and ancient carving of a human figure is to be displayed at Edinburgh Castle over the next fortnight. From the BBC, Orkney Venus to face the public: 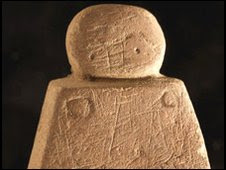 The Orkney Venus, which was discovered a few weeks ago, is a 5,000-year-old female carving which has the UK's first known depiction of a person's face.
The 4cm-tall carving, known by locals as the Westray Wife, will be on show in the ante-room of Edinburgh Castle's Laich Hall along with colourful panels giving information about how and when it was found

It will be exhibited for a fortnight from Monday.

What jumps out here is firstly the change of name from Westray Wife to Orkney Venus in the space of a few weeks, the reason being that carvings discovered from elsewhere in Europe portraying women with rounded heads, large breasts and exaggerated hips are known as Venus images. The latter two attributes, large hips and breasts, are obvious requirements when rearing large, hungry babies. The name Orkney in Irish Gaelic is translated as island of the pigs.

Genesis6:1 And it came to pass, when men began to multiply on the face of the earth, and daughters were born unto them, 2 That the sons of God saw the daughters of men that they were fair; and they took them wives of all which they chose. 3 And the LORD said, My spirit shall not always strive with man, for that he also is flesh: yet his days shall be an hundred and twenty years. 4 There were giants in the earth in those days; and also after that, when the sons of God came in unto the daughters of men, and they bare children to them, the same became mighty men which were of old, men of renown.

Note too that that the display ends on 1st November, Samhain, All Souls' Day, the first day of winter, a festival of the dead still celebrated by lighting bonfires and where our witch infested Halloween tradition is rooted. It would be perhaps speculative to suggest that Guy Fawkes (Faux Guy) night, five evenings later, is connected.

On Tuesday we read of a hedgehog rolling in to the top star Prestonfield House Hotel before giving birth to three babies.

The area Prestonfield lies in the shadow of Arthur's Seat, whilst the hotel has both historic and recent connotations; from Prestonfield history:

The lands of Prestonfield, or PRIESTFIELD, as the estate was known until the late 17th century, were ceded in medieval times to the Cistercian monestry at Harehope in Northumberland. This wealthy order had been founded in 1150 by Henry, Earl of Huntington – son of David I of Scotland. In 1376, after the bloody War of Independence, the order’s Scottish lands were confiscated and given to the Earl of Carrick, son of King Robert II – who sold them to the wealthy and powerful Wardlaw family.

Sean Connery, Elton John and Catherine Zeta Jones all partied the night away. And Oliver Reed raised the hell for which he was so very well known.

Now, new life has been breathed into the stately old pile following its acquisition by James Thomson, owner of Edinburgh’s celebrated Witchery and Tower restaurants.

As well though, Prestonfield House was the birthplace of rhubarb eating in Scotland (hence it's in-house restaurant name nowadays) which leads us to the film Rhubarb, starring the cat - Orangey - who later appeared in Breakfast at Tiffany's before closing her her career with Village of the Giants in 1965, a movie based on - some say illuminati - HG Wells' offering: The Food of the Gods and How it Came to Earth . 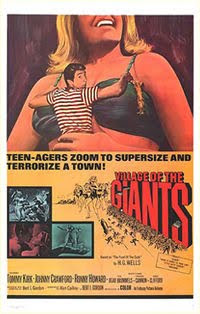 Check the above poster, the massive breasts (in context of the Lilliputian) with the GIANTS logo angled like an erect penis.

Note too considering the BBC report (linked below) that the proprietor, James Thomson, also owns the Witchery establishment- which celebrates it's 30th anniversary on 30/10/09 - and Tower (Babylon) restaurant which both lie in the shadow of Edinburgh Castle, the former at the top of the Royal Mile, the latter located on the top level of the museum. Mr Thomson has had an unprecedented rise to "fame"; chefs always remind me of alchemists, they seemingly produce gold from base materials.

The quote below, from Shakespeare's A Midsummer Nights Dream also resonates the nefarious ongoing agenda as indicated by the hedgehog, given Prince William's birthday on that eclipse laden, solar maximum night back in '82.

You spotted snakes with double tongue,
Thorny hedgehogs, not be seen;
Newts and blindworms, do no wrong;
Come not near our Fairy Queen.

Charles Darwin, no less, apparently believed in a myth that hedgehogs rolled onto fallen apples (think Garden of Eden), before making off with their plunder to eat underground, in safety. This has been proved nonsense; you may chance upon a hedgehog with an apple stuck to it, however it has no desire to eat said fruit. 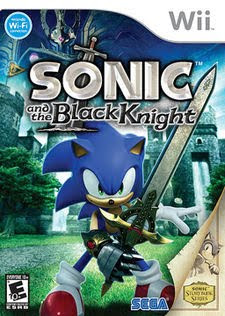 Moving up to date, Sonic the Hedgehog also identifies with William of Orange/Rex mundi, Baphomet/ boss of da new world order, given the video game release last March, Black Dawn soundtracked The Black Knight - resonating the solstice - a game based on Arthurian legends. For Wills is King Arthur, resurrected, and all of the above plus more. 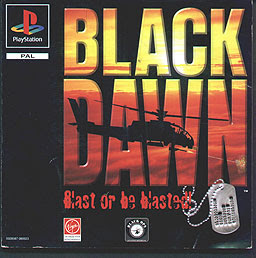 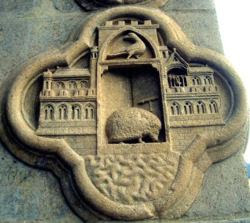 From hedgehog central we note alongwith the earlier Darwin information that the sandstone, hedgehog centred image above was sculpted in interpretation of the following Biblical passage, Zephaniah 2:14, regarding the destruction of a great city :

While the King James version renders this verse as:"And flocks shall lie down in the midst of her, all the beasts of the nations: both the cormorant and the bittern shall lodge in the upper lintels of it; their voice shall sing in the windows; desolation shall be in the thresholds; for he shall uncover the cedar work"

Getting down to nitty -gritty, Stone of Destiny containing Edinburgh Castle, is built upon the volcanic plug (the top part that blows off during an eruption) from Arthur's Seat - the sphinx like dominating natural hill feature of Edinburgh. The plug resonates the eye/capstone from the pinnacle of the familiar new world order pyramid, final destination of William. 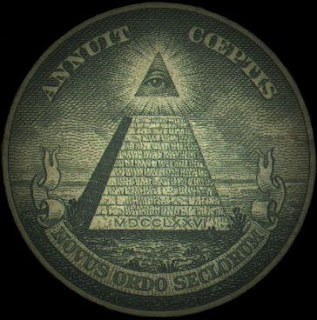 To close, encapsulating Venus at Edinburgh Castle, nephilim/fallen angels, bloodlines, the phoenix, the volcano Arthur's Seat, the Sun (God), the advent of the Age of Aquarius 2012 + and our future destiny - all seeing eye included -we have the gypsy myth of roast hedgehog: the story goes that to cook a hedgehog one simply surrounds the unfortunate in clay, places in a hot campfire, then removes and cracks the ball open, all that is left is flesh, spines and all else removed. 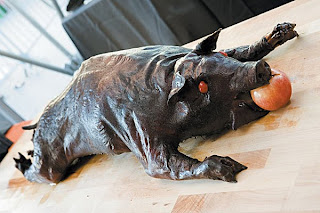 1: Curiously, and beside the point sort of, Lucifer was never referred to as such in the Bible until the 4th century or so, and that occurred when St. Jerome - the same Saint as noted in the Treaty of Lisbon signing - carried out his translation of the scriptures

Posted by Newspaceman at 16:52

it's old Orkney Venus now and again is it?

soon after reading yr post this page orked up

so sent it along

"Some of the Ancient Ones were Giants, others were Dwarfs. The Dwarfs were called Orculi because They dwell in Orcus, the infernal Land of Death. (Some say the Orcades [Orkneys] take the name from the Mouth of Hell hidden in their cliffs.)"


hm guess they didnt die when they ran off those cliffs....

if you fail of pasta, perhaps fried hedgehog?

Cheers Ray, thanks for link, appreciated.

You too have heard a HH chewing s slug.

I tried to explain near the end where the dwarfs are throwing bags -large Os - into a door with a Z formation.

Then "dopey" hangs the key on the outside. lol.lol.

I tried to explain this but only got a couple of hi ho's.

Sorry Ray, last comment got a bit mixed up at end. Link as above.

This way it seems to me that I am not sure how much girth you want, the mind-blowing
Stoya is the newest inclusion to the artificial vagina Girl Team.