Remember, remember, the fifth of November 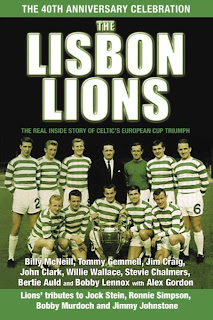 This is a footnote to my last (ruby slippers) post

First and foremost, and I really should have checked this first, Beckham's boots. The catalogue for the sale by Convery Auctions on 5/11 gives their lot number as 121. Remember Rik Clay who is sadly no longer with us; his work on the Olympics 2012 ( I really should have credited him with the Zion/2012 image I used previously) , Prince William and his thoughts behind the re-occurrence of the numerals 11.11 and what that could perhaps signify ? Well 121 is 11 squared.

The above is the official club pennant produced by Celtic for the customary exchanging of the pennants by the club captains prior to the 1967 European Cup Final, were Celtic became the first British side to win the famous trophy. 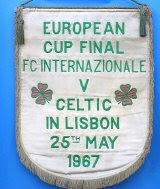 From my post regarding the occult significance of the signing of the Treaty of Lisbon, in Lisbon, on Lucifer's Day last December. From Going back to our roots:

Mr Obama's maternal ancestor, Edward FitzRandolph, is said to have emigrated to America in the 17th Century.

According to genealogists, his ancestry can also be traced to William the Lion, who ruled Scotland from 1165 to 1214.

cheers
Posted by Newspaceman at 14:22

InterNAZIONale seems to say so much in so few letters.
Ruby is included in Downards stuff on Jack Ruby, and Beckham, a striker, shoots [w ith Ruby shoes]

Statutes of the Priory of Sion

Article VI
The Prieuré de Sion comprises 121 members. Within these limits, it is open to all adult persons who recognize its aims and accept the obligations specified...

Another good post Newspaceman, Thanks !
This is just a mere intuitive feeling, however, I'm sure that there is something more going on with the pope wearing his ruby red slippers. Especially when he is wheeled out at certain locations and specific times for photographic press sessions.

But also with the greatest respect for Rik Clay.
I do remember him in person, from a fairly recent meeting held in West Yorkshire. Unfortunately, I never did get a chance to have a talk with him about about some of his discoveries.

But as young Rik was also working in Leeds before his unfortunate passing. I thought I would also mention the Leeds band, The Kaiser Chiefs. Two songs in particular, spring to mind: 'Ruby' & 'I predict a riot' with some references to The Lunar Society member John Smeaton


All the best
etm

Cheers aferrismoon. Downard is an inspiration which I thank you for.

Anon, thanks very much for the info.

I exchanged a couple of e mails with rik before he got "famous",I feel really sorry for his parents after all the attention.

I take it the John Smeaton you mention is not Smeato - "hero" of the Glasgow airport attack, yet some say he was smoking a cigarette and had to be asked to help.

Curiously, he was also mentioned in my Stone of Destiny post after leading a 6000 strong march round Edinburgh the same weekend as the Royal Highland Show at Ingliston.

As the "terrorist trial started, smeato took an asthmatic anxiety attack and ended up in hospital - perhaps scared that the truth would come out.