Birds of a Feather

21 days since the Hibernian fire was stoked.


English, Russian, and allsorts of hooligans on the "rampage" in France. "It's almost like the mid eighties" except it's not.

Many things spring in Scotland; to be, in time, globalised.

Back in the days prior to the Scottish referendum, I posited the establishment occultly desired Scotland to be "on it's tod" as part of a magickal, alchemical ritual. If something has worked once before, and exactly the same pattern is followed, then it should work again. The more one practises magick, the more one perfects. Like law and doctors and dentists. Like King James and his Bible. Like Freemasonry. Like golf. Like Grand Theft Auto.

Back in the day I was taken by the clock behind Alex Salmond pre referendum at the Nationalists' conference. I feel numbers are symbolic, always have done, it's hard to explain: potentially hard wired in my brain?

English "hooligans" are currently shouting about leaving Europe, ISIS, and the IRA. 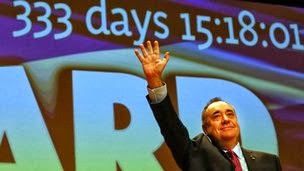 On 26th May, squarely sixteen days ago, the BBC reported that net migration to the United Kingdom had risen to 333,000 in 2015. After the figures were released, those in favour of Brexit climbed. If the UK votes to leave but the Scots vote to stay, another referendum beckons. A third.


cheers
Posted by Newspaceman at 19:21

Seems the French authorities didn't put much of a barrier between the English and Russian fans - ??? - We have been told that there is high security due to possible terrorism yet they can't even segregate the fans properly.

All around the time of the Brexit [ even though it should be UKexit to include Northern Ireland] it seems to be somewhat synchronous.

The last few years of stoking nationalist fire via migrants, Ukraine, Brxit,etc etc appears to have 'worked' - a great alchemical stew as you seem to imply.

As well as that there is joy of the event marred by the violence theme , dark and light, good and bad.

Anyhow a bit from the BBC's Phil McNulty:

'In the steamy, humid environment of this port city in the south of France, with alcohol following freely in searing temperatures and demonstrations of aggression from both sets of fans, all the ingredients were in place for events that unfolded in the Vieux-Port de Marseille.'

So they've known about it for days and still let it kick off.

After the Hibs Rangers game the police described the situation as a "perfect storm", almost as McNulty implies. Alcohol, sunshine and two sets of supporters who, historically,are not the best of friends. So surely they knew too, prior.

I am still pondering the "coincidence" of the Brexit referendum and the Battle of Bannockburn, the latter being described as the birthplace of modern Scotland by Alex Salmond. Pondering because of the myth of the alleged involvement of the Knights Templar.

cheers, good to hear from you.


RE: Bannockburn - it seems that the English fans had to do a runner from the terraces last night.
It's difficult to say whether the Euros are unifying or divisive, or both.


Today's Trooping of the Colour, see the Queen is in green

Really interesting. Why was the queen in green?

Anon - Some years ago the Queen met Martin McGuiness, an IRA man and she wore green. It seemed to preface the fall of Rangers, the Protestant club that supports the monarchy. Of course green is just a colour and as such there may be nothing in it, but it does come soon after the Rangers-Hibs match and it was Hibs first cup win for 12 million years.

RoI into the Commonwealth ?

Thanks for all the comments.

@Anonymous (about that colour, green, that could be a symbol of "what's hidden", like in nature)...

Eire met Sweden in France (1-1).
And ramadam time has come.