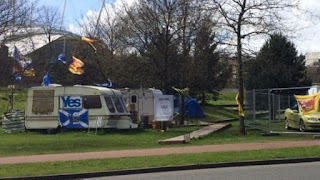 It's rare that a news report makes me choke on my tea or that I write two posts in one day.

Close to the Scottish Parliament building at Royal Holyrood a makeshift shanty town has been established in respect of Scottish independence. The parliament is not happy and has taken legal steps to remove them. The inhabitants of the shanty-town - IndyCamp - previously represented themselves in court. They argued about the Declaration of Arbroath and the Act of Union, basically citing that the laws being used to remove them were themselves illegal. It's a sort of "freeman on the land" argument. At the last hearing, the presiding judge, Lord Turnbull, dismissed their arguments as having "no foundation" however he suggested they perhaps utilise human rights legislation and directed them to consult a solicitor.

Today the case was continued. Apparently Indycamp have contacted 144 lawyers (12x12/ Book of Revelation) to try to find representation, however all are too busy.

I will just cut and paste from the BBC article which resonates many of the philosophies expressed here, albeit  through a looking glass :

Independence campaigners have announced their intention to cite the Queen as a witness in their fight against eviction from Holyrood.

The IndyCamp group described their vigil outside the Scottish Parliament as a "spiritual mission" inspired by "the second coming of Jesus Christ".

The parliament has taken them to the Court of Session in a bid to have them removed from the campus.

Judge Lord Turnbull has retired to consider the next steps in the case.

The latest hearing was intended to let the group provide an update on their attempts to find a lawyer to represent them in court.

In unusual scenes at the Court of Session, the hearing eventually saw the Queen cited as a witness, the rebirth of Jesus proclaimed and Lord Turnbull himself accused of "blasphemy".

Camper Richard McFarlane told Lord Turnbull that he had contacted 144 lawyers and firms, who all told him they were "too busy".

He explained that about half of the people taking part in the camp, which was set up in November with the goal of staying in place until Scotland is independent, were on a "spiritual mission".

He said Jesus Christ had returned to earth and was "the rightful monarch" of Scotland, calling for the Stone of Destiny to brought out for his "coronation"....

Another respondent, Arthur Gemmill, then accused Lord Turnbull of "blasphemy", saying he had "ridiculed" his belief in God.

When asked to substantiate this claim, having been warned about the potential of committing contempt of court, Mr Gemmill said he could not find the passage in the written judgement, but insisted Lord Turnbull had insulted him at an earlier hearing.

He said that the judge had "dismissed my comment that only God could make laws for men", by saying "is that right" in a "derogatory" tone.

Lord Turnbull then rose to consider what he had heard.

I will update,when I know more.

cheers
Posted by Newspaceman at 12:47