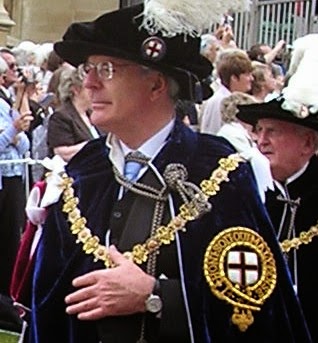 I referenced the Queen's elite "Order of the Garter" in respect of new members, Mervyn King, and ex spook boss, Eliza Manningham-Buller just a couple of days ago (here), loosely tying it in with actor Brian Cox's Queen's Commonwealth baton relay visit to Rosslyn Chapel.

Ex Conservative Prime Minister, John Major, is another of the 24 knights.

John Major, like most conservatives, is non too popular in Scotland.

Today's Daily Record reports on how Mr. Major has accused Scottish First Minister, Alex Salmond, of deliberately setting the referendum date for the 700th anniversary of the Battle of Bannockburn in order to "maximise anti-English sentiments".

Some claim that the Scottish forces were helped at the battle by the Knights Templar.

Some might consider John Major's comments to be more "reverse psychology", as we have noted recently in regard to the referendum.

Some more on Bannockburn, from mythomorph :

Perhaps no battle in history has been written about more passionately and at greater length than the 1314 Battle of Bannockburn. Without that great battle Scotland may never have managed to shake off the yoke of English domination, may therefore never have established a true national identity, and so would never have birthed the stirring Declaration of Arbroath which was, in the opinion of many, the model for America’s own Declaration of Independence...

But was Scotland really the underdog, or was it only meant to appear so? Working under the credo that what looks too good to be true usually isn’t, I looked someplace new—at the sky above the battlefield—and saw what had perhaps been hidden there, in broad daylight, almost seven hundred years ago...

At dawn, in a sky already too bright to see him, Taurus the bull stands on the horizon, facing north. The uppermost stars of Orion the Hunter have just risen. Venus, a planet long associated with the pre-Christian Goddess, shines just north of Orion’s weapon, in a direct line with the bull’s lower horn. The sun rises in Gemini, the heavenly twins, followed by Jupiter, Mercury, and the moon in Cancer. Bringing up the rear is Leo the lion, with the war planet Mars below his breast. Accompanying Orion are his two hunting companions, Canis Major and Canis Minor—the Big Dog and the Little Dog.

Throughout the day this celestial group moves westward. Taurus reaches his zenith at midday, and begins to descend. As evening falls, Orion drives Taurus below the western horizon. The sun sets. Night returns. Short as a midsummer night is at that latitude, for those who must fight at dawn it must seem all too long. Many will never see another...

Let’s now consider events at Bannockburn over that same period, keeping in mind the hermetic dictum “as above, so below.” The parallels are striking...

The Egyptian Connection: The 15th-century Scotichronicon claims that the Scots derive their name from Scota, daughter of the pharaoh who pursued the Children of Israel out of Egypt. Scota and her followers left Egypt shortly thereafter and, after many years, her people eventually settle in a land they name Scotia. It has recently been claimed in Keith Laidler’s The Head of God that Scota’s father was Akhenaten, the pharaoh who tried to establish monotheism in Egypt, using the sun to represent the one true god who should otherwise have had no image. Most astonishingly it has recently been claimed by Laurence Gardner, author of Bloodline of the Holy Grail, that Akhenaten was in fact Moses, the man who led the Isrealites out of Egypt.

The Jesus Connection: In 1982’s The Holy Blood and the Holy Grail it’s argued that Jesus Christ and Mary Magdalene, contrary to Christian dogma, were married with children, founding a “holy bloodline” that continued to thrive through some of the highest and mightiest families of Europe. Evidence of that bloodline may have been uncovered by the Knights Templar, that mysterious medieval order of warrior monks, while excavating beneath the ruins of Jerusalem’s King Solomon’s Temple in the early 12th century. Upon that order’s barbaric 1307 dissolution, it’s thought that many escaped from France to Scotland, just in time to help Robert the Bruce, a man whose parentage may have united both bloodlines—the Egyptian and the “holy”—in his struggle with England...

Posted by Newspaceman at 11:48

The man Jaques de Molay, leader of Templar Knights. Was burned at the stake in March of 1314. Certain messages had been intercepted, by Catholic Pope's forces. That compromised the whole organization. Which after the death of Molay and three others, were burned as heretics. Went underground. Their sign a red cross on white background. Was flown by Christopher Columbus among others.

It would not be surprising to learn that KT would help the Scots at Bannockburn? The Templar organization was fighting back at their persecutors. Later the Freemasons, claim to be a part and successor of KT? It is said that at the execution of French, Louis XVI a freemason dipped his hand in Louis; blood and said "Jacques de Molay tu es venge"? So we can see how the two organizations have a fit?

Traditionally, it is said, St Michael's Mount, off the cornish coast was always a Templar stronghold? I suppose the Mont Saint-Michael, in Normandy, might be a candidate also? The one in Cornwall is held by the St. Aubyn family under a 999 year lease arrangement. Owners since 1647.
http://www.stmichaelsmount.co.uk/our-island-story/st-aubyn-family/

Who really knows? They do, I suppose?

My belief is that the Knights Templar were hand in glove with the "freemasonic" movement, as you say though, "who really knows".

We can though just watch and look and often matters are semi-revealed.

There's a lot of myths about Cornwall and Jesus and tin; some even say that Jesus visited Glen Lyon (a Druid place - see the Fortingall Yew). There is also speculation re Pontius Pilate being Scottish and being born in Fortingall. Make of that what you will.

Then again we have Comnys Beaumont and his Edinburgh/Biblical theories.

Also, sorry, there's a multitude of Templar gravestones in Scotland, some on the West Coast, some just up the road from me.