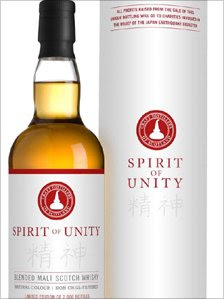 We read today of a magnificent gesture by seven of Scotland's independent whisky distilleries, each donating a cask of single malt to be mixed with the others and sold to raise money for the "disaster relief effort" both in Japan and New Zealand. The product is to be called Spirit of Unity.

Which is all good at face value.

However, there is another side to the Japanese, especially in regard to their work ethic, which is often promoted via the media as being something desirable. One sees them in their car factories, immaculate in identical boiler suits, doing physical exercises and suchlike before commencing ultra-productive operations. My Grandad told me more about their ethics too, he came across them in the second world war, and for sure they follow their orders, regardless.

Yeah, there's a spiritual price to be paid for global unity.

on my mind lately too, i enjoyed martial arts back when i could actually move lol and respect bushido ... generally

an uncle now deceased of whom i was (am) particularly fond spent an unpleasant time in a p.o.w. camp, sweet guy who was never the same afterwards, and neither was japan

gratuitous cruelty has alway been a problem w/japanese spirit, hope they get that fixed, i'd like to see them on their feet -- eventually

Their work ethic is touted as desirable - I watched one report when men who had lost their jobs just never went home again for the shame.

I met a japanese man who told me about work - the boss would take a juniour out and buy him drinks all night, and all that was bought had to be drunk otherwise you'd be out of a job. Thus the bosses would get the juniours pissed and laugh at and humiliate them. He was quite happy to be in Europe.

Anyhow looks the Wedding is going to destroy Britain -

Hiya Ray, aye my grandad was one of the first into their camps, he was in telecoms. He said it was disgusting what they had done and that it was more or less now forgotten. When I was a boy he had a huge row with a Japanese lady in the museum cafe, it was inspiring.

Moon, aye the vapours & the turning jap euphamism. Nips for the nips.

Off topic, the Queen's funeral rehersal is on the same day as the wedding.

Very interesting that wedding/funeral are connected.

They know something we don't know?

i did not appreciate the camps, take it personal

as AF mentioned, part of the institutionalized cruelty was strict regimentation/collectivization of the japanese male-- if the boss is a fucking dragon etc

speaking of... no doubt youre soon popping off to the Wedding eh? sending round a limo are they? :O)

"Off topic, the Queen's funeral rehersal is on the same day as the wedding."


well not off topic, "Spirit of Unity" is the (alchemical) product of the japan/n.z. special blend

coniunctio, the "royal wedding" unites "sol and luna" in the "conjunction of death" -- basically a death/resurrective ritual (a manifest example, like the jfk kingkill, features "camelot's" bride and groom)

as Frazer described, this is the basis of the sacrificial year-king agricultural (Demetrian) rites, not appreciably different from Isle rites across the centuries -- a druid is officiating, after all

for this reason the "queen" holds corresponding funerary re-hearse-alls