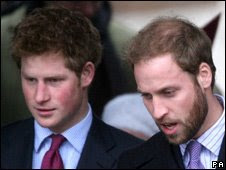 Today is the equinox, a time when light and dark balance equally in the day, the modern indoor cannabis grower's reason for coordinating the timers to a 12 12 hour frequency, mimicking natural environmental conditions and thus tricking the plants into entering their flowering cycle.

We read from the BBC today of Prince William (who was taken from his mothers womb on the longest day of the year during an eclipse, thus personifying the sun on Earth at it's maximum power) and his, alongwith brother Harry, ongoing good deeds under the headline: Princes extend charitable links.

We read again about his climbing of Helvellyn as noted in my post Top Kat, a new charities forum and, perhaps most importantly:
Julia Samuel, founder patron of the Child Bereavement Charity, says working with William's other charities is "much more than a gimmick".
"It gives us a feeling of being united as a group, which is strengthening. You know particularly in a recession you can feel quite isolated," she said.
A friend of Diana, Princess of Wales, Ms Samuel believes William and Harry have inherited some of their mother's characteristics.
"She had that extraordinary ability to communicate just with the way she looked at someone," Ms Samuel said.

cheers
Bottom images -Eye of Horus/Teletubbies
Top, horned and bearded image from Christmas Day last year, see One for the horn Baphomet !.
Posted by Newspaceman at 15:11

Hi Newspaceman. Your William posts have intrigued me for some time.

Thank you for recommending the Ring of Power video. Excellent stuff.

I even think I'm getting my head round the idea of the Salmon of Wisdom/Knowledge that you, sometime ago, mentioned.(Hope the practice doesn't occur today in a more extreme form)

Recently, I found a text that claims Charlie's original choice of name for William was Arthur but "the Queen vetoed the idea, who believed the symbolism might bait those English
nationalists who are fully conversant with the Norman origins of the neo-'British' Empire into open revolt."

"Prince Philip suggested William as the best choice of name for his
grandson because the occult meaning is sufficiently hidden in a jumble
of letters and numerals for its symbolism to pass unnoticed among many
English patriots. If the prince ever became king, he would be William
V. The 'W' at the beginning of his name should be read as two Vs and
the two L's as I's. By rearranging these numbers and letters, it's not
difficult to arrive at the intended message — I Am VI VI VI. The
number 666 is a highly appropriate description of a 'moonchild', the offspring of the Beast."

Here's hoping that you and family are well.

Thanks very much Martin, appreciated. I think that a lot of people get bogged down in the Omen movies and thus their perception of what the anti-christ actually involves, is slightly befuddled.

I just see "it/him" as the head of a new global order, similar to previous.