Going back to our Roots

I have reposted this given the referendum in Ireland on 2nd October. The above image comes from the The Southern Star, an Irish newspaper, which advises it's readership not to vote No if they don't understand the full issues involved in the Lisbon Treaty which, frankly, is highly unlikely given the depth of the goatskin binded document. The symbols speak for themselves...

It was the 13th day of the 12th month, 2007. The venue was the historic Hieronymites or Jeronimos Monastery in Santa Maria de Belem, a parish of Lisbon in Portugal.

It was here that an important treaty was to be signed, the Treaty of Lisbon, a treaty so significant that European Commission President Jose Manuel Barroso commented that:"From this old continent, a new Europe is born"

At around 12 o clock, the European Leaders marched in two by two, Noah's Ark style,thirteen pairs of them as the choir sang Beethoven's Ode to Joy.By quarter to one the ink on the signatures from the specially engraved silver fountain pens was dry, yet the Treaty of Lisbon still not complete, awaiting the signature of the crucial 27th member - a certain Mr. Gordon Brown, Prime Minister of the United Kingdom - a signature which would not be forthcoming until three, or so, hours later. Did this late signature symbolise something more, something more sinister.

Lets go back to the beginning, the date, the 13th of December, Saint Lucy's, or Lucia's Day, still celebrated mainly in Scandinavia as a Church feast day, and the beginning of the Christmas season, given before the reformation of the Gregorian calendar in the 16th century it fell on the winter solstice, the shortest day and longest night of the year in the Northern Hemisphere. St Lucy is often depicted nowadays holding her gouged out eyes on a golden plate.
Wikipedia entry for St Lucia is here.
And for St Lucy here

"here are traces of the legends of Saint Lucia even in the Nordic countries in the middle ages, and her day of remembrance is also December 13th (just like the Lussi). However, yet another name is relevant here, namely Lucifer. His name has the same etymological background (lux is– latin for ‘light’). Once he was an angel of light, then he was dethroned and became the Prince of Darkness. "

The venue itself is also worthy of consideration, Jerominos Monastery, located in the Belem District of Lisbon in Portugal. Constructed on the site of a monks hermitage using local gold coloured limestone, building began in 1502 and took half a century to complete, several different sculptors being involved in the project. Within the building are two statues, one of Henry the Navigator, the other of Saint Jerome, after whom the Monastery is named, a seemingly solitary and somewhat controversial character.

St Jerome is depicted as a hermetical individual, who roamed far and wide. He is probably best known for the tale of removing a thorn from a lions paw, the beast staying with him as a friend and protector. It is in fact this deed which is portrayed in sculpture in the Monastery. It should however also be noted that St Jerome is credited by some as the individual who translated the Bible into Latin, although there would be some religious contention over that issue - as there may well be over whether the tale of the lion is true - especially as a previous version is attributed to Aesop.

For purposes which will become evident later, it should be noted that Saint Jerome is, according to the British Optical Association (BOA) , the patron saint of spectacle makers.

One also cannot touch on the subject of Jeronimo without reference to its connection with "American" secret societies such as the 322. Much very valuable information on this subject can be gleaned by clicking here.
Wkipedia entry on Jeronimos Monastery is here.
Wiki entry on St Jerome, click here.

An easy to read and quick resume of Jerome and the lions paw is here.

The location of this historic event - Lisbon, an important ancient seafaring port with a municipal holiday date of June 13th, St. Anthony's day. Founded by Ulysses after he left Troy, according to Greek mythology
Wiki entry is here.

Santa Maria de Belem, the suberb in Lisbon where the Monastery is located, "famous as the place from which many of the Portuguese explorers set off on their voyages of discovery", its name itself derived from the Portuguese for Bethlehem.
Wiki entry is here. 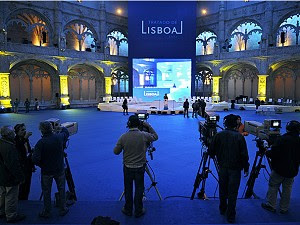 Moving back to recent events, can we glean anything from the logo used to promote the birth of this new Europe. You can see how it has been craftily designed, the L and the N of Lisbon forming what looks like the two bottom corners of a square, leaving the word ISBOA. I would suggest that this is in fact two different words, a combination, a marriage of IS and BOA, IS referring to Isis, the Egyptian mythological queen Goddess and Boa, a word with its base in serpent lore as the Oxford English Dictionary says :

Unfortunately, no further reference can be found for St Jerome, although Pliny, a Roman of the first century commented further :

"In India, serpents grow to such an immense size, as to swallow stags and bulls…about the river Rhyndacus [modern Turkey] they seize and swallow the birds that are flying above them, however high and however rapid their flight"

Lets go back to the Gordon's 27th signature. 27 is 3x3x3, 3 to the power of 3, or three cubed, as such the cube root of 27 is 3.
It must be remembered that numbers are symbols first and foremost. The number three itself is an important religious symbol, examples being the Holy Trinity; Father Son and Holy Ghost, or, turning back to Egyptian mythology again, we have Is, Ra and El or Israel.

There is perhaps an easy way to describe the numberic symbolism of 27 though, something most will be familiar with, the Rubik's cube. Forget the maddening puzzle of attempting to get the sides all the same colour and concentrate on its construction, a matrix of 3 sections of 3 rows and 3 columns. Have a look, turn it about, how many cubes can you actually see. 26. The middle cube, the cube which holds together the others in a geometric pattern and thus structure - and indeed the whole power of the cube - cannot be seen. An hidden, yet visible power, rather like that behind Gordon. 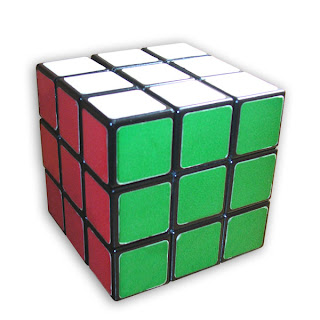 So what can we surmise from events last Thursday. It could to be said to be an anciently revered and significant festival date, that of the winter solstice. It's location, famous for birthing in terms of maritime adventures and named after the biblical Bethlehem, birthplace of Jesus Christ. The European President himself called it a birthing event.

The answer to the riddle of St Jerome and the Boa lies within the centre of the cube. If we work backwards, we can find the solution. The story of the lion and his paw is a metaphor for a bloodline. When the thorn is removed and the lion follows Jerome on his global travels, he is leaving a drop of blood in each spot. Hence Je-rome represents the the bloodline of Rome, surely the bloodline of the Boa, or Serpent.
St. Jerome, the patron saint of librarians and spectacle wearers !
And St Lucy's gouged out eyes reinforce that if we look, we shall see.

The Lion King - The Biblical anti-christ

Posted by Newspaceman at 06:39

Bloody well done post. A wonderful de-cloaking of elite symbolism as it happens.

Thanks Michael, I am going to write a wee bit more on it later in the week.

Need to take a night or two off the news and try to write more about this later in the week. It's a lot harder though.

Hopefully you have heard of the "canoeist who came back from the dead".
His sons names - Mark and Anthony.

Great work, have read it a couple of times. No sensationalism but though pwerhaps objective 'what the fookism'
Anyhow Liz Boa , Snake Queen. Lisbon , in my speculative history of the Worls, = one of the great naval strategic ports governed by the behind0the-scenes palyers who control empires. Venice, Tyre, Carthage, Malta are other Mediterranean places. Of course Britain was the piece de resistance til all that wireless stuff and planes tookover

I meant to also say that Lisbon hosted the 7 new wonders of the world competition on 7/7 this year.

Sorry for lack of comments recently, cant think of anything relevant to write plus my head is minced.

You keystone cops postwas too close to home, I have a complaint in about a traffic accident thing - when seeing the inspector last week, he asked me specifically what "the cornerstone" of my complaint was. Lie-ability

I was tempted ask about his opinion of roundhouses but not worth it.

The world seems a most strange place at the moment, maybe Christmas/ financial pressures?

ps have just tried the nickname button, will see what happens

Yeah I think it was last week when I fell asleep on the sofa while my son was watching TV (his father was in the other room) and it was about the origans of Sankta Lucia..(as you wrote about for the 13th of December) it was also mentioned on this programe about her history in Italy, and I woke up to a story I didn't hear the whole thing about about that someone mentioned Lucia had beautiful eyes, so she tooke them out of her head and offered them to the man who commented upon them.. and that in our area of the world, the getting dressed up with the candles on the head, that was because of a direct German tradition where young men and women with long hair were dressed in these long white gowns for them to immitate Christ.. and that December 13th was two things before christians came to the area, one was Lucifer's night.. the other one was a tradtion, it being the longest night supposedly, that if you didn't get out of bed first that a louse would get in your hair.. "lus" in Swedish.. like in Lucia.. and Lucifer and Ljus the word for candle or light.

Thank you for sharing this wonderful work!

I imagine u ahving a full-blown synchromysic moment while the Inspectors Matrix face fell away .
'How do u know about the cornerstone, its a cube , in Lisbon'
'Excuse me sir..'
Well hope u unmince or reconstitute in all the correct palces.
Happy HogManay

Just leaves the Irish and Czechs

I think Joyce had a bit of thing for 29. Its aprime number , thus indivisible , like Totalitarianism

the Taoiseoch is still Brian Cowan

I teach English at Irish Emb. In Prague

Excellent!
Yes, Rome is Saturn's City and the Cube is Saturn. Check.
27 = 2 + 7 = 9
27 = to power 3 = 3 x 3 = 9
9 is the RePeatIng NumBer... the Cube Matrix of Lucifer/Satan, the Stone who Fell.
They're a bunch of bloody sickos, materially into Satanism, the Beast, the Dark Crystal of Death, and spiritually into Luciferianism, the Great Ego, the Grand Architect. God help us.