It was the dark of the moon at the weekend, the final death throes of the very full moon mentioned in my recent post - When shall we three meet again ? - the one about the snared hares of Cawdor and a possible but unquantifiable Macbeth connection; a connection which appears to have re-reared it's ugly head.

Some say that "dark forces" are at work during this part of the lunar cycle and some would tell you further that it is the time of Hecate, Goddess of Witchcraft; yet whether this is the case I have no proof. However, two separate but very similar horrific incidents in Scotland last Saturday would certainly validate that manner of thinking, also bearing in mind the proximity to the astronomical Beltane:

"Hekate is awesome & can be terrifying, for She rules all that is outside our ken: Death, & the dark intuitive wisdom that is beyond the conscious mind. Such wisdom comes through dreams & whispers, mediumship & divination. It is the inspired vision of artists & seers. For some it may be too much & bring the madness of lunacy: Hekate's power can poison as well as heal."

Beltane was also a time when the Otherworld was seen as particularly close at hand.

The first was in an isolated car park off the Crow Road, near Lennoxtown and close to Glasgow, where Ashol Kalyanjee set himself on fire after violently stabbing his two young sons Paul and Jay Ross to death.

The second took place on the East Coast, in Buckhaven, Fife, where a Mr. Robert Thomson, aged 49, stands accused of repeatedly stabbing and murdering his son and daughter, their bodies being discovered on Saturday evening in Muiredge Cottages.

Whilst I am not of the mind to dwell on these type of gruesome and manic incidents, what seemed rather uncanny to me was that both Lennox and Ross are characters from the sparsely populated Shakespearean tragedy and that Macbeth savagely stabs King Duncan to death before having Banquo murdered. Especially if we travel full circle and consider that Iain Banks wrote The Crow Road, the scene of the carnage.

And of the second, Buckhaven only a couple of road miles through the moors from the non fictional ruins of the once powerful Clan MacDuff's castle, and only twenty from Leuchars.

I shall end as I ended my original post and leave matters up to your own imagination.

Bearing in mind Hekate from above and maybe her Macbeth role. 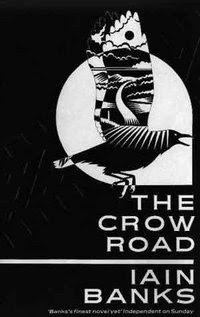 Here for Buckhaven BBC
Posted by Newspaceman at 07:13