Flying the Flag for Europe 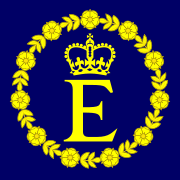 We saw the birthing ceremony for the new Europe last December in Lisbon and I suggested in my post Going back to our roots that perhaps there was a hidden or occult "power" operating behind this new super-continent.

Yesterday Her Majesty the Queen visited Turkey for a state function - we read from the BBC :

On Tuesday evening she gave a speech prepared by the Foreign Office at the presidential palace.

"For us, Turkey is as important now as it has ever been," she said.

"Turkey is uniquely positioned as a bridge between East and West at a crucial time for the European Union and the world in general."

Britain is a strong supporter of Turkey's attempts to join the EU. The country became an official candidate in 1999 and entered formal accession negotiations in 2005. At the banquet, President Gul thanked Britain for backing Turkey's bid.

"The United Kingdom has become one of our most loyal supporters in Turkey's march toward membership of the European Union," he said. "We are grateful for this unwavering and permanent support."

And yet some would have you believe that our monarchy is against this New European Order ?

And he causeth all, both small and great, rich and poor, free and bond, to receive a mark in their right hand, or in their foreheads:

Posted by Newspaceman at 05:05

Hi Newspaceman
I do hope this comment gets through, I think you must have a leak somewhere.
I can't help but see the Turkey link from the Gallipoli angle & it interests me just how much it is still milked. There's usually about 10,000 visitors around ANZAC Day - just a few short weeks ago - I think this would be a great time for a little ritual or two.