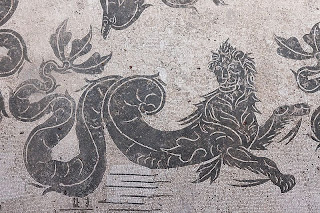 From the BBC News today we read that :

Colonies of rare seahorses are living and breeding in the River Thames, conservationists have revealed.

Experts at London Zoo said the species had been found at Dagenham in east London and Tilbury and Southend in Essex, over the last 18 months.

The revelation coincided with new laws which came into force on Sunday to give the creatures protected status.

Seahorses are from the genus Hippocampus which comes from the Greek words hippos and campus meaning horse and sea monster respectively; although the history goes back further, to at least Phoenician times.

The hippocamp or hippocampus (plural: hippocampi)(Greek: ἵπποκαμπος, from ἵππος, "horse" and κάμπος , "monster"), often called a sea-horse in English, is a mythological creature shared by Phoenician and Greek mythology, "Homer described Poseidon, who was god of horses (Poseidon Hippios) as well as of the sea, drawn by "brazen-hoofed" horses over the sea's surface"

"The mythic hippocamp has been used as a heraldic charge, particularly since the Renaissance, most often in the armorial bearings of people and places with maritime associations"

The Sun-day of revelation referred to above being yesterday, the same Sun-day that the Olympic torch visited London, one of the 22 cities that the torch will visit on it's global tour. Today it has moved to Paris, just in time for the Diana inquest verdict it seems.

These sea horses', like the "mythical" creatures that pulled Poseidon's chariot, also ferry a living "god" behind them.

Diana's son, him of Biblical Revelation.

For more information on the symbolism of the route the torch followed in London, please see here.

Your mention of ferrying brought Charon to mind.
Just for fun I typed in 'Charon 22' to see what came up. Charon is a moon or dwarf planet of Pluto which was discovered on '22' June 1978.
There was a site which said it's mass was 22% of Pluto & I got very interested but other sites vary. However it was officially named on 3 Jan 1986. 3rd Jan is Feast of Saint Geneviève, patron of Paris - quite interesting read.
http://en.wikipedia.org/wiki/Genevieve
Also quite interesting to follow the Lutetia thread in that, which links to Paris too

Also the males tend the young I think.

Seahorse males get pregnant and give birth to the young!

'Hippocampus' is also an area of the brain. It's one of the old areas under the cortex, in the limbic system, and its associated with dreaming and syneasthesia; I read about a theory that suggested that the area is involved in a type of pure-experience of raw data, and it's then processed sort of outwards. In that the sensory organs take in data direct there and then it's processed filter-like to the varying cortical areas (and other places) and 'rationalised'.

(syneasthesia is a term for experiencing two or more senses as combined senses, eg you can taste sounds, or see sounds, or hear colours)

I'm sure that the aardvark doesn't have a hippocampus (it's one of the few animals known not to dream)...but can't immediately find any references to confirm that. Interestingly though, when I search it it yeilds pages comparing seahorse snouts to the aardvark snout.

Poor ol' Pluto - how can it not be a planet, when it has a Moon? Just because it's far away (yet Neptune spends some of it's orbit further out than Pluto apparently), and on an incline?!
http://www.thinkgeek.com/tshirts/sciencemath/8964/

I think Pluto is the Anubis (outer guardian) of the planets. The original astronomy glyph for Pluto looks like a Grail cup.
Also (you can read this in a book on Chiron by Barbara Hand Clow) there's some interesting links between the hidden planets (the outer planets that can only be seen with telescopes, so didn't feature in recent histories astronomy - they only used the 7 planets (inc. Moon and Sun, hence the days of the weeks being 7 and named after them) that can be seen with the naked eye) and their discoveries as with when atomic science and radioactive energies were discovered.
Plutonium, Neptunium, and Uranium - all radioactive and named after / the same as the three outer planets.

In astrology, Uranus is associated with technology and innovation, Neptune with dreams and the movies, and Pluto with the underworld and the unconscious.

Given some of the writings on the nuclear waste moving-around chessgame some nations play with one another (ie - how they manage to lose nuke waste during transportation), and troubles with the Cassini probe (which has plutonium onboard), I always saw Pluto's demotion as having to do with those 4D archetypal games being played.

The chess analogy used in describing that is also of interest, because of the knights tour of the board.
There's lots of Rennes les Chateau links to horses too, such as The Horse of God theme.