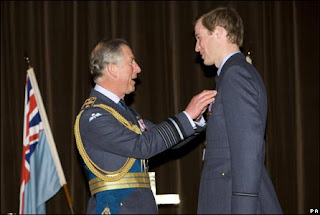 Yesterday, 11th April, Prince William received his Royal Air Force wings from his father Charles at RAF Cranwell, Lincolnshire , a base which was symbolically "born" on 1st April 1916 from the naval HMS Daedalus .

"Cranwell is home to the Royal Air Force College (RAFC), which trains the RAFs new officers on a 32-week course. It is thus the RAF equivalent of Sandhurst or the Britannia Royal Naval College, and is considered by some to be the spiritual home of the RAF."

"In Greek mythology, Daedalus (Latin, also Hellenized Latin Daedalos, Greek DaidalosΔαίδαλος () meaning "cunning worker", and Etruscan Taitle) was a most skillful artificer, so skillful that he was said to have invented images."

The very same day perchance, Sir Richard Dannatt, the head of the British Army, was at a Territorial Army 100th birthday celebration launching at Edinburgh Castle to: "mark the start of a summer of centenary celebrations across Scotland - called T100 - which will culminate on Remembrance Sunday in November". Very curiously, reporting of this important latter event seems to be almost non existent; it is in the Daily Express newspaper today, but not on their website. Verification is however available here.

Going back further in time, pre computer, it seems that the date 11th April has always been important to the monarchy of the British Isles. For it was that same date, 319 years before, in 1689, that William 3rd of England - perhaps better known as King Billy or William of Orange - and Mary 2nd of Scotland were crowned as joint Sovereigns of the United Kingdom, despite "considerable opposition":

Many Protestants heralded him as a champion of their faith. It was largely due to that reputation that he was able to take the crowns of England and Scotland,

His reign marked the beginning of the transition from the personal rule of the Stuarts to the more Parliament-centered rule of the House of Hanover.

"William and Mary were crowned together at Westminster Abbey on 11 April 1689 by the Bishop of London, Henry Compton. Normally, the coronation is performed by the Archbishop Of Canterbury, but the Archbishop at the time, William Sancroft, refused to recognise James II's removal"

"Although most in England accepted William as Sovereign, he faced considerable opposition in Scotland and Ireland. The Scottish Jacobites— those who believed that James II was the legitimate monarch — won a stunning victory on 27th July 1689 at the Battle of Killiecrankie, but were nevertheless subdued within a month. William's reputation suffered following the Massacre of Glencoe (1692)"

Bearing in mind my recent posts concerning the symbolism of the number 3 and it's cubic form of 27, I find the fact that William himself was seemingly born on 4/11/1650 and married Mary on 4/11/1677, his 27th birthday, fascinating. Especially when you remember that 4/11 is 11/4 reversed or Americanised.

To close, going back to Daedalos and his skillful invented images, then just perhaps there is something else to be gleaned from another 11/4 event, this one from 1970: 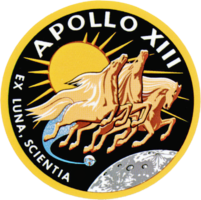 From the Moon, knowledge?

For relevant information on the Orange Order, please see here.

I had a look at April Fools Day on wikipedia, it's got one of the longest description's I've ever seen. I wonder if there's more to this day than we realise.
http://en.wikipedia.org/wiki/April_Fools%27_Day

Is "our" Prince William 27? I wonder to what "Mary" he is being married?

Did u ever see ' Just Another Saturday' , a Play for Today from 1975.
One of the lines [ from the hero's dad was something like - A Dutch Prince and a Scottish King fighting for the Crown of England in Ireland - referring to the Battle of the Boyne
Out of the Moon , Knowledge - Out of the Sun life ?

WW: that was the "reason" for the red arrows display in London. We are all being treated like fools, whilst they mock us.

Aferrismoon, never seen it I don't think but it sounds apt.

The King James bible is still the official version used today - all Protestant and Catholic bibles are based on it, excepting those Christian versions that use the previous collections of books such as Essene scrolls, and the 'lost gospels'.
They have started including Apocrphyal texts in King James versions.

One of the books that wasn't included, the Book of Enoch. And the monarch before James II - was Elizabeth I (contemporary with the New World voyages, the UK going into Ireland, and the Enochian magicians.....and the metaphysical poets, and Shakespeare..)