From the BBC and continuing recent previous postings:

Perhaps unconnected, and therefore just for the record, it is athlete Denise Lewis who is pictured at bottom with the Olympic torch. Born on a potentially Pythagorean, patently cubical and palindromic 27/8/72.

Denise: The girl's name Denise \d(e)-ni-se\ is pronounced de-NEES. It is of French origin, and its meaning is "follower of Dionysius". Feminine form of Dennis , from the Greek name Dionysus.

And of the meaning of Lewis?: Seemingly the son of a mason - but you need to see here for a more accurate angle on what exactly is being ceremoniously "built" around us. 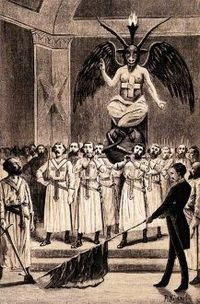 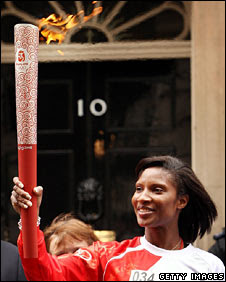 That's the torch for the next Olympics, like a giant spliff.
Hey Man , if u wanna watch the 10,000 metres u gotta be spaced.
Also the 10 on the door, could be binary for 2.

I include a comment I got from WISE WOMAN, some interesting stuff about Hillary and Philip


Can't let synchronicity of Newspaceman's comments go uncommented on.
I don't follow news much (gives me indigestion). I know Prince Phillip was absent for the Hillary Memorial at St George's Chapel, Windsor on 2nd April. I'm presuming they have linked Hillary with the olympic torch going up Everest.
The numbers 1122 jumped out at me.
Hillary died Jan 11, his funeral service was held at 11.00am, 11 days later on 22 Jan (the day Heath Ledger died). I've been tracing synchronicity with the life of Hillary & you can check it out if interested -
http://toolonginthisplace.blogspot.com/

Cheers aferrismoon, have linked Wise Woman's posting above, most enlightening.

Might be a good idea though, for spliffs to be passed round the world, could see some benefits.

The 10 doorway is on a famous London gov building. It stands for the sun. As also the symbol above it.

According to one version of the Apocalypse of Noah I read in a translation of the Book of Enoch, the original name for the sun was 'Aryanes.' Yes, one can easily see the cultist derivations that may have sprung from that particular nomenclature. Considering that obelisks are traditionally associated with sun worship, and many of the world's major power centers - London, Rome, Paris and DC have them, it does make for interesting speculation, no?

Hiya, thanks for the comments.

AMP, surely more than speculation, given what is going on around us today, in terms of "global events" ?

It seems clear to me from current events that a new sun king is waiting in the wings and will hit centre stage soon.