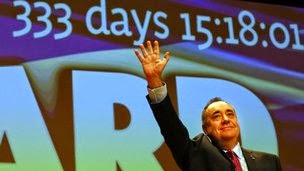 In Tolkien's Hobbit, the hero remarks: " Victory after all, I suppose! Well, it seems a very gloomy business".

And indeed, gloomy seems the business of Scottish independence. After much contemplation, I have decided to vote YES, yet there is a nagging doubt in the back of my mind, a bigger picture.

To explain such, it is necessary to define alchemy, magick, and the New World Order as I see them.

Beginning with the last, the NWO, my mental depiction of such is a global society with single-currency, a king to rule over "us", and a semi-mind-controlled, quasi-androgynous, worker slave citizenship, with compulsory euthanasia. The net product of the endeavours of these worker-slaves will consist of "advances" in genetic modification and DNA tampering, alongside the colonisation of outer-space.

Magick is trickier to explain. The word itself covers a huge variety of various techniques, for example sorcery and necromancy, however here I would stick to the familiar mind control/collective hypnotism, the use of media, and the use of celebrities and staged events to influence people and their behaviour. Bear in mind that all magick is based on ritual: if something has worked before and the same set of circumstances are followed, then it will work again.

Alchemy to most means an attempt to turn base metals into gold, however this can be seen as symbolic. It's really about perfection. It ties in with magick and also with ritual-loving freemasonry; the purpose of the mason is to perfect himself, the purpose of freemasonry is to, allegedly, create a "perfect" society.

So how does the above relate to "independence" ?

Freemasonry's "mother lodge", number 0, reputed to be the oldest in the world, is located in Kilwinning, Scotland.

Infamous, and apparently well respected,  occultist, Aleister Crowley, purchased a property in Scotland as he believed it was the focal point of various energies.

All magick is based on ritual: if something has worked before and exactly the same set of circumstances are followed, then it will work again.

In alchemy, the materials must be taken back to base before the attempt to form the "gold" can begin.

Centuries ago, Scotland and England were almost separate, meeting only at the border and thereabouts for the ubiquitous wars. That all changed with House of Stuart King James, 6th of Scotland and 1st of England, son of Mary Queen of Scots, Bible reviser and promoter to the masses.

James was a fairly popular King  who, to an extent, gained  that popularity due to the circumstances of his (alleged) mother's (alleged) execution. It was Jamesie who began the process of forming a "united king-dom".

Now, it must be pointed out here that I see the British monarchy and freemasonry as the backbone of world events, the ringleaders so to speak - and in that respect I may  be wrong. However, I have this deep gut feeling that the reason for "independence" is more to do with magickal rituals and alchemy than for the benefit of Scottish people.

It will be interesting to note the financial markets in the run up to, and aftermath of, the independence vote - and whether it acts as a catalyst in some manner.

That all said, my thought is that if  "we" vote YES, "we" will have  slightly more chance of overthrowing the tyranny which surrounds us; destroy the ring at source so to speak.

An interesting conundrum, if this is correct? I would say to not be so concerned.

For those who control things, the outcome is already decided. Do you really suppose it matters either way, for the citizens? The bankers will still control the money. The taxpayers will continue to pay through the nose. The absentee landlords will stay absent.

Vote YES and cast the die. You might even lose the BBC? Now why would that be so bad?

It's very, very, doubtful the ordinary Scot will see much of the black gold wealth, from under the sea. A wealth that rising tides developed, centuries past. A wealth that a fortune of arbitrary borderlines, now bestows. Vote YES, cast off the yoke of the Sais. Those germanic and norman peoples, from across that same sea, which will offer up this wealth foretold. The stone of Scone is restored. ... National pride can once more be paraded through the streets. Hoorah, hoorah, hoorah! Vote YES!

Forget the numbers, do what your heart wants.

Hiya hirundine, thanks, your sentiments are appreciated.

With or without independence (it appears to be a very close call with brewing animosity) I feel we will see him on the stone of scone in Scotland first, before the world beckons.

Re absentee landlords, there is a good book, Who Owns Scotland, which details exactly the position in the larger estates. It is well worth a gander.