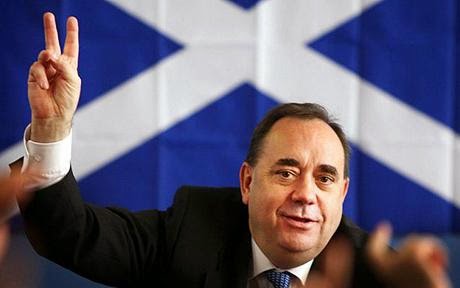 "The UK party leaders will be campaigning in Scotland later for a referendum "No" vote, as Alex Salmond claims their visit would boost the "Yes" side."

Unfortunately for once I think Salmond is right. Three clueless clowns who are totally out of touch with the real world."..

"I reckon they are making such a pig's breakfast of this deliberately because they all actually want Scotland to vote Yes - why else would they be this bad ?"

British Prime Minister, David Cameron, has taken the opportunity to write an article for today's mail on line : Our union is precious. Don't tear it apart :

When the world wanted representation, we gave them democracy. When they wanted progress, we had the Scottish enlightenment and the industrial revolution.

When slavery bound innocent people, we abolished it; when fascism threatened freedom, we defeated it. A hundred years ago, our boys went off to war together – and they did so as comrades, united by purpose and hope for a better world.
As individuals and as nations, we have done extraordinary things. This is the special alchemy of the UK – you mix together Scotland, England, Wales and Northern Ireland and together we smash expectations.

Note how Dave credits the United Kingdom with the creation of the world as we know it now. Note too his reference to alchemy.

I wrote about alchemy in respect of independence in my post earlier this month :Scottish Independence, Alchemy, Magick and the New World Order :

Alchemy to most means an attempt to turn base metals into gold, however this can be seen as symbolic. It's really about perfection. It ties in with magick and also with ritual-loving freemasonry; the purpose of the mason is to perfect himself, the purpose of freemasonry is to, allegedly, create a "perfect" society...

It will be interesting to note the financial markets in the run up to, and aftermath of, the independence vote - and whether it acts as a catalyst in some manner.

The elite, monarchy, powers that be, all covertly desire independence. It is indeed to do with alchemy, the dissolution of what we have now, the taking of materials back to base, in order that the gold (the New World Order) can be formed.

What we see transpiring now, is a magickal alchemical ritual.

And just so there can be no doubt of the foreseeable future in respect of independence and the monarchy, Alex Salmond yesterday noted (BBC News):

First Minister Alex Salmond has said the Queen "will be proud" to be the monarch of an independent Scotland.

The SNP leader dismissed press reports that Her Majesty was concerned about the prospect of Scottish independence.

He said he had an audience with the Queen at Balmoral Castle two weeks ago but would not say what was discussed.

"I want the Queen as head of state, as Queen of Scots of an independent Scotland, as her ancestors were," he said.

Mr Salmond was speaking at a photocall outside St Giles Cathedral in Edinburgh.

He said: "I think Her Majesty the Queen, who has seen so many events in the course of her long reign, will be proud to be Queen of Scots, and indeed we would be proud to have her as monarch of this land."


What also jumps out about this week's events is the year and a day effect I have written about before. It just so happens that the announcement of a second child for Prince William and Kate was made on 8th September, exactly a year and day before the Queen, on 9/9/15, will become the longest reigning British monarch ever. here

Note that even if we vote for independence, matters will not be completed until 2016.

Meanwhile, from the mail on line


Prince William today suggested the growing threat of Scottish independence was more important than the news his wife, the Duchess of Cambridge, was expecting again.

The Duke said Catherine, who is suffering acute morning sickness, was ‘feeling okay’ after a ‘tricky few days’.
But he added: ‘It’s important that we all focus on the big news and the big international and domestic things that are going on at the moment. That’s what my thoughts are at the moment. 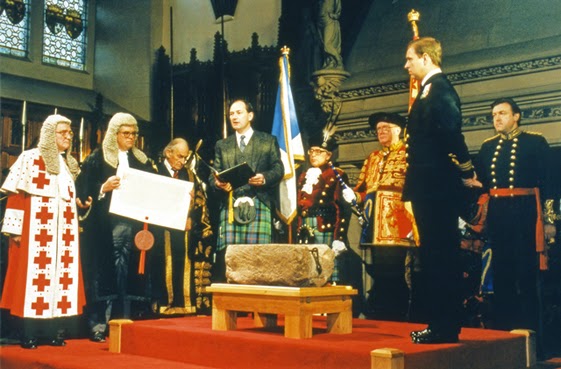 More on a year and a day - Legally minded
Posted by Newspaceman at 11:51

As regards the Saxe-Gotha-Coberg family. I would be giving them as little ink as possible. It is tiresome, continually seeing them in print whether, old-fashioned newspapers, magazines, or eprint.

Does a publisher send an invoice to Buck. Palace each time they are mentioned? I imagine the royale press corps. has a huge budget for keeping them in the news?

As for Alec Salmond? Surely that makes four clueless clowns? Or is he more machiavellian than that? Given the handling of Robert Green and Hollie Gregg.

Hiya hirundine, I agree it's tiresome, but there are "good" reasons for such.

Hollie Gregg - I understand the legal position very well and it's not quite what is promoted by the "alternative media".

If you want to know more, just ask.