Only Fools and Horses ? 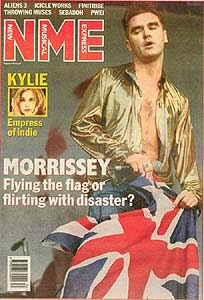 Today, 13th December, it is widely reported that singer, Morrissey, has commented on the Kate Middleton, Oz Radio, suicide nurse story whilst being interviewed by a New Zealand television show, 3News. Apparently, he noted that "There’s no blame placed on Kate Middleton, who was in the hospital as far as I could see for absolutely no reason. She feels no shame about the death of this woman". He also claimed that: "I’m sure the Palace and Clarence House put maximum pressure on this poor receptionist and nurse, and of course that’s kept away from the press. By this time next week, she’ll be forgotten."  (mail on line)

Morrissey is, of course, allegedly an anti-monarchist. I wrote about him here back in August when he claimed that the Royal family had hijacked the Olympic Games for their own "nefarious purpose" and that Olympic fans had a "Nazi mindset".

That's not the only time I have written about the former Smiths frontman though, back in April on the day of the Royal Wedding I noted of how he had suggested the Royals were "benefit scroungers" whilst, in the same post, pointing out that, perhaps contradictorily, Morrissey used William Blake's Jerusalem in his Introducing Cantona video. Contradictorily, because Blake's Jerusalem could well be linked to the concept of British Israelism, a concept the Royals, certainly historically, were glad to promote.

Also, back in March 2011, I noticed a further Morrissey correlation. It was the 9th of the month, and an announcement was made to the media that Prince William was to visit New Zealand and Australia to visit the disaster-struck regions of Christchurch and Queensland. In my post, Uncanny, I noted of how this announcement coincided with another disaster, millions of sardines, anchovies and mackerel washing up dead at King Harbour Marina, Redondo Beach, Los Angeles. I tied this in tenuously (Shades of Grey?) with Morrissey, given he covered a song called Redondo Beach on a double AA side single, the other track being, There is a Light which never goes out.

Now, Redondo Beach - a song about a lesbian who commits suicide - was originally written by Patti Smith and released on her album, Horses, which amazingly was released on 13th December, 37 years ago. From the linked post, re 13th December :

"Someone else who's light never extinguishes is St. Lucy, a Christian martyr who's name is derived from lux, lucis, "light" (wiki) . Her "Day" is the 13th of December, once thought to be the shortest day of the year and hence celebrated as a "lightbringing" event." (Also, see Lucifer in this regard)

Meanwhile, also from the Daily Mail, albeit yesterday, we were treated to images of horses, hard at work,  pulling logs in the Royal's Balmoral Estate. (here) 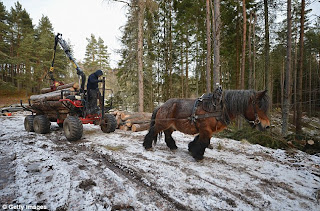 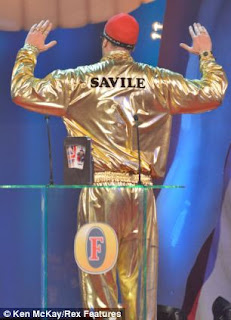 All of which got me thinking more on the "alchemical" concept of "making manifest all that is hidden". Basically, it resolves around the powers that be telling us the truth of what is going on - no matter how nasty and slave based it may be - whilst we sit and accept it. Do we see this with Morrissey, is he part of it, telling the truth - making manifest ? Is Sacha Baron Cohen allowing the scandal of Jimmy Savile to somehow dilute, by making fun of it ? That's how it seems. Hail Lucifer. 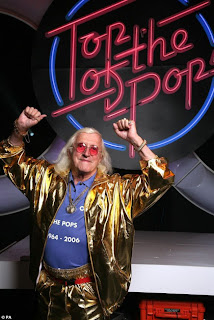 Note - Morrissey appears on BBC radio tonight in some sort of tribute programme.
Posted by Newspaceman at 14:01

Hi, very good points made. I saw the awards and frankly the jokes about Savile were gross and ridiculous, and there is more and more of it around.

Regarding the Royal nurse, I mentioned on Aangrifan's blog about the statistical improbability that a female commits suicide by 'hanging'... I never liked the use of the word 'conspiracy', but this is what it is! Even the scientific facts back up the 'theories'!

just seen the queen on the news looking at gold bars,the same gold as savilles shellsuit.Anyways the illusion of life is mind blowing life is a mystery.NEWSPACEMAN the connections you find, are fascinating.I especially like the morrisey ones.You seem to have an inner sight are you a part of this alchemical plan to reveal everthing lol.But seriously your work and findings are followed with great interest by myself.The next reveal is roy castle and to think all the complaining he did about passive smoking cheeky b.....d.But is it normal for a grown man to wear tapshoes and dance,watch your back bruce thats all i can say.

I like how you cover the ephemeral margins of all this, while everyone else freaks out about Jacintha, you stick to your own path. A light bringer to dark crevices, I think.

Even I'm shocked at how crass Cohen can be. Will he ever assassinate a British Jew the way he has everyone else? It would seem he's not happy until everyone else is brought down to his level, at least in his act.

Cohen seems to be taking on Jimmy's mantle , perhaps.

His characters do have a penchant for faeces and genitalia.

Thanks to all, appreciated. Soorry for delay, had no keyboard for a spell.