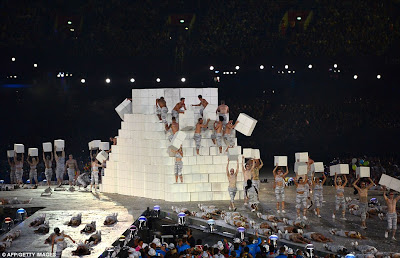 Details are being reported on the 11 day long Paralympics opening ceremony, with the Mail on Line calling it The Greatest Show on Earth (part 2). The performance is called Enlightenment, and will feature athletes flying on golden wheelchairs, the ubiquitous Royal Family, Professor Hawking and Shakespeare's Tempest, the latter prominent in both the opening and closing Olympic ceremonies. Lord Coe notes that "It (the ceremony) focuses on that extraordinary period in European history and the great intellectual revolution that took place between 1550 and 1720. Everything from Newton making sense of gravity and motion to Napier with logarithms and Harvey with blood circulation. It’s really about ceilings, about human understanding, about limitations and the importance of knowledge. Within that period some quite profound things were being said about the rights of man. You can probably gather what it’s trying to say".

Obviously I will be watching both the opening and closing events, keeping a close eye on William. I apologise for not having yet "typed" up the Olympic closing ceremony details as yet, I should have it done soon, although what jumped out was the 303 cubed pyramid construction whilst Kate Bush's, Running up that Hill (A Deal with God), played in the background. Note that Bush originally titled the song, A Deal with God, but her record company objected, and note the lyrics "and get him to swap our places".

wiki - Running up that Hill .

Also see acceleration1111, re the Mars, will i am, Scotland connections.
Posted by Newspaceman at 09:28

Lets discuss what rights humans should have = typically enlightening.