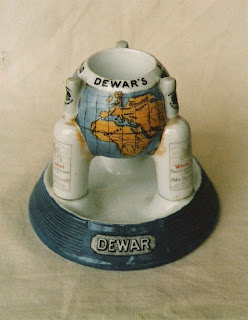 The Bible, revised by Catholic born, Protestant raised, King James Charles Stuart, 6th of Scotland (1567-1625) and 1st of England (1603 - 1625), contains many numerical references in it's construction, for example: 40 days in the wilderness, 12 disciples of Jesus, and probably the most infamous of all, the number of the beast, six hundred, three score and six as found in the Book of Revelations.

In the same manner our current Western society relied heavily on the Scots in it's architecture, America being built on the trades of tobacco, slaves and alcohol - many Scots adopting a freemasonic angle to their lifestyle when travelling abroad to oversee this. Numerous sources have pointed out the curious symbols and suchlike which are engineered into American buildings and indeed even their banknotes, with the dollar bill showing pyramids and all-seeing eyes.

Banking, and it's global replication, began with the Bank of England, founded by a Scotsman in 1694 and originally located in Walbrook, London, on the site of a Roman temple dedicated to Mithras, their God of Contracts. Next year, in 1695, the Jacobean (House of Stuart) Catholic sympathising Bank of Scotland was formed, the Hanoverian Royal Bank of Scotland following some 32 years later with full British governmental/state approval.

Back this time last year we saw the ramifications of the global financial crisis when the two main aforementioned Scottish banks appeared to be in major financial difficulties, the Bank of Scotland being bought out by another financial institution - Lloyds - on Government orders, whilst the Royal was very shortly afterwards bailed out by the ever accommodating State itself, using taxpayers monies, obviously. Shortly after the Loyds acquisition of their rival it became clear that they had in fact bought a dead duck and also required State intervention in the way of funds.

Two weeks ago a stushie (row) broke out after the Government revealed that they additionally lent £61.6 billion to the two financial organisations, yet kept the fact secret in the manner of a freemason. Obviously the shareholders of black horse Lloyds are a bit upset as they voted to acquire Halifax Bank of Scotland in ignorance of this vast cash injection and thus confirmation that in fact their purchase was bankrupt. As noted, after the takeover had taken place the State "injected" monies into Lloyds, again using taxpayers money, and in effect, just like in the case of the Royal Bank of Scotland, we became our own bankers to a certain extent, in this instance 65%.

This week, 70.3%, soon to be 84%, state owned Royal Bank of Scotland has seen another media circus, this time in respect of bonuses to be paid to staff. It appears that the Government have advised the directors of RBOS that they are not happy with their proposal to pay £1.5 billion in bonuses to top investment banking staff, in response the directors have advised that they need to pay high performers/earners top money in order to retain their services. Furthermore, the board have threatened to resign, en masse, if their recommendations are blocked. This would, if it happens, leave the Bank with no clear leadership, business strategy, mission statement etc. - prerequisites for any organisation competing in the cut-throat world of capitalist banking.

In some of my older posts I pointed out that this global money meltdown was a scam, part of a conspiracy to create a New World Order - a new "Golden Age" - and we have heard many top politicians, including Scots born Gordon Brown, use this phrase in the last year or so, always in regard to the financial doom which pervades the so called "global community"; indeed as it stands today, I believe that every man woman and child in Great Britain is "indebted" to the UK state by the sum of approximately £30,000, the majority of this liability due to the "Scottish bank" bail out.

Turning back to the Book of Revelations, it seems transparent that the time is coming for implementation of the infamous mark of the beast and indeed the appearance of the antichrist, a one world order "leader/King", in my humble opinion. Yet it appears that good old James whilst editing his version of the Bible made a mistake in the translation of the number 666, as from wikipedia we note :

Different early versions of the Book of Revelation gave different numbers, and 666 had been widely accepted as the original number. In 2005, however, a fragment of papyrus 115 was revealed, containing the earliest known version of that part of the Book of Revelation discussing the Number of the Beast. It gave the number as 616, suggesting that this may have been the original.

This numerically pans in extremely well with the secret 61.6 billion loan, as indeed does the secrecy angle when considering the freemasons and "their" manipulation of today's global economic situation, however I realise that to offer that potential "coincidence" in any prophetical sense could be regarded as amusing.


However bear in mind, for example, that Scotland domiciled, self confessed black magician Aleister Crowley stated: “Every intentional act is a Magical Act” and indeed if we consider this line of reasoning then surely the construction of this New World Order is both magical and furthermore occult - given that it is hidden, or certainly obscured, from the average punter's eyes.


Continuing down that line we must give credence to the importance of ritual in magical acts and indeed ritual as part of our unconscious, manifesting itself in diseases such as OCD. I believe that the basic theory is that if something has worked before, it will work again as long as exactly the same conditions are in force and exactly the same technique is applied.


Working back from that and tying in to Scotland, we again stress the importance of Scotland to the building of the current society we inhabit, Scotland is indeed the root. Yet we are moving forward to a different type of society - a global village - seemingly driven together by the ongoing and as yet incomplete global financial meltdown.


What you have and will see with the two Scottish banks, in particular the Royal, is a blueprint for the future economic system of the New World Order. Basically, one will be paying mortgage interest and suchlike to the State, who in effect are your bankers, indeed they will own you and your children will be born into what is, lets face it, fictitious debt and slavery without the chains. This is laughingly called, as previously noted, a golden age and as all good alchemists will know, in order to create gold, one must reduce one's materials to their pure base state.


cheers
Posted by Newspaceman at 14:21

Doesn't anyone get BS and RBS yet?

Cheers aferrismoon - good one with the light/dark interpretation given that we hear this morning about Prince William and his role as "shadow king."

You will maybe have noticed that today is the 13th of December, St. Lucy's Day, originally the longest night of the year before calendar reformation. The lightbringer.

Same day that Treaty of Lisbon was signed.

I recall saying to the Trannyhumanists who attacked me like a swarm of Immabees (or is it wannabees?) after an earlier article of mine, something to this effect:

"If you have any idea who owns and controls the advanced technology in this world, how could you possibly trust these same people who are running the global financial system with putting a chip in your brain to somehow become 'superhuman'???"

Of course, their response was predictable - I am an idiot, and they are, of course, much smarter than the rest of us in their idolatry and cult worship of their elitist pseudoscience and its elitist founders; Darwin, Galton and the Huxley bunch.

The whole thing is utter insanity, and as ferris put it, "Royal Bull Sh!T". lol

Thanks for this article.