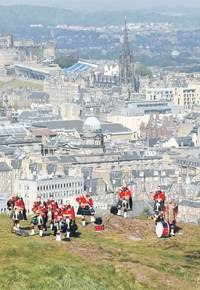 Referring back to yesterday's posting regarding Prince Harry and his visit to the Big Apple's Ground Zero to lay a wreath commemorating the dead of 911, it is maybe just coincidence that we read from the Edinburgh Evening News, that, again on the 29th, 28 members of the band of the Royal Regiment of Scotland assembled at the top of Salisbury Crags, in full uniform, to pose for photographs being taken by an airborne Royal Navy (search and rescue) Sea King helicopter.

What needs to be considered here, for those not acquainted with the geography of Edinburgh, is that Salisbury Crags is contained within Her Majesty the Queen's Holyrood Park, directly next to sphinx-like, extinct volcano, Arthur's Seat, which is where in fact the helicopter hovered. 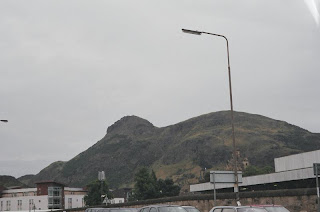 From wikipedia:
From some angles, Arthur's Seat resembles a lion couchant. Two of the several extinct vents make up the 'Lion's Head' and the 'Lion's Haunch'.
Additionally, albeit perhaps, future global king, Prince William (Arthur Philip Louis), is currently posted to a two year training course - codenamed Golden Osprey - to become a search and rescue Sea King helicopter pilot with the Royal Navy.

Maybe I am fishing, but could he have been involved in this exercise, after all, the 29th May was Oak Apple Day:
a holiday celebrated in England to commemorate the restoration of the monarchy in Great Britain and Ireland.
These ceremonies, which have now largely died out, are perhaps continuations of pre-Christian nature worship.

see grailcode for in-depth biblical prophecy
Those interested in further esoteric possibilities should look up the background of the oak apple, see: of oaks and apples.
Posted by Newspaceman at 14:15

Thinking of Jimmy Pursey - a name that sounds like jimmy[open] purse, relating it to the big steal of late.

Harry - to persistently carry out attacks

I looked up Pursey last night on wiki. He is with ex-members of a band called Towers of London.

The Towers of London are worth looking up on wiki, I found their entry amusing, especially the lead singer, Donny Tourette. He was on celebrity big brother, I watched the first episode, he arrived drunk and swearing a lot. Nevertheless, Stephen King named their song, I'm a Rat, as 7th best song 2008.

I should mabe write a synch thing ?

cheers, I was getting lonely

Fascinating. Also been watching the visit of the Prince in NY:

There was a bit of 'royalty' fashion - Tenpole Tudor from The Tudors
AdamAnt and a few others wore that Hussars uniform.
With celebrities and royalties and politicians all seemingly merging into one mass of self-satisfied society-shapers.
Arch-decadence tastes so sweet.

The Media seems to have it in for anyone. I see they're bleating about 'internetters' having the nerve to write news stories.
Their megalo-jealousy I feel is behind amny attacks on blogging, videoing, having a personal opinion on any given news stories

In fact much of society seems 'vengeful'.

I myself am a bit vengeful aferrismoon, it must be catching. Whilst I appreciate that I may not be entirely correct in my vision of future society, what makes me rage most is the financial element behind "conspiracy theories" and that there seems to almost be a cartel operating, perhaps pretending to dislike each other, perhaps not.

I try to bite my tongue, though not always achievable.

If Arth = Bear; I wonder if the female form of 5he bear then = Arth-emis which = greek version of Diana

Not far off a classic fairy tale, all those bears.

Sneaking in a bit of James Bond [ aka HRH Sean], he appeared in Dr.No with Ursula Andress - Ursula = fem. of Ursa.